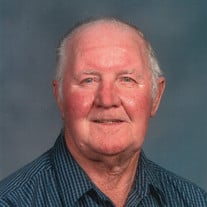 Abraham “Abe” Nunnikhoven, 92, of Oskaloosa passed away Monday morning, February 19, 2018, in hospice care at the Mahaska Health Partnership in Oskaloosa. Abraham Henry Nunnikhoven was born, February 14, 1926, to Cornelius Adrian and Grace (Van Veldhuizen) Nunnikhoven near Harvey, Iowa. He attended McMillian School through the eighth grade and then went to work helping his father on the family farm southeast of Oskaloosa. Abe entered the Army, April 12, 1945, at Jefferson Barracks, Missouri. He served in Korea and was discharged December 27, 1946. Upon his return to Oskaloosa, Abe resumed farming with his father. February 18, 1947, Abe married the-love-of-his-life, Harriet Dorothy Vander Schaaf, at the home of her parents in Oskaloosa. Abe and Harriet farmed several places in Mahaska County before purchasing their first farm west of Cedar in 1954; they purchased a farm five miles southeast of Oskaloosa that became known as the home place, in 1958. In 1977, they built a new home closer to Oskaloosa. Harriet passed away, August 3, 1981. Abe enjoyed traveling and was able to visit nearly every state. Abe grew up in a home that appreciated music, and he passed that interest on to his children as well. He sang in the Gospel Singers Male Chorus for several years; he also sang with his three sons and his daughter Marcella accompanying them, performing for many programs and celebrations in the area. Abe loved farming and was able to help his sons with their operations well into his 80s. Abe was a member of the Cedar Christian Reformed Church and the Central Reformed Church and was also a member of Farm Bureau. Abe’s family includes his children and their spouses: Carl and Lorna Nunnikhoven of Oskaloosa, Allen and Kerrilyn Nunnikhoven of Oskaloosa, Howard and Beverly Nunnikhoven of Lynden, WA, Marcella and Phil King of Georgetown, TX, and Alice and Robert Van Wyk of Oskaloosa; 13 grandchildren; 24 great-grandchildren; two sisters: Mary Ann Van Kooten and Frances Walraven, both of Oskaloosa; and two sisters-in-law: Leona Nunnikhoven of Pella and Cynthia Langstraat of Otley. In addition to his parents, Abe was preceded in death by his wife, Harriet; a sister, Wilma Van Weelden; several brothers-in-law; and several of Harriet’s family members. Funeral Services for Abe will be held at 11 a.m., Saturday, February 24, 2018, at the Central Reformed Church in Oskaloosa with Reverend Jon Nelson officiating. Burial will be in Forest Cemetery with Military Honors by the Oskaloosa Honor Guard. Visitation will begin at 10 a.m. Friday at Langkamp Funeral Chapel; the family will greet visitors from 5:30 to 7:30 p.m. at the funeral chapel. Memorials will be made to the Oskaloosa Christian Grade School or Central Reformed Church. The service can be viewed by those unable to attend by going to www.centralosky.com and clicking on the video link at the bottom of the home page.

The family of Abraham "Abe" Henry Nunnikhoven created this Life Tributes page to make it easy to share your memories.

Send flowers to the Nunnikhoven family.