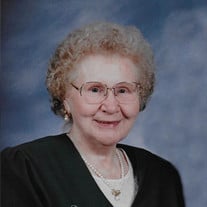 Adeline Eveland, 95, of Oskaloosa, passed away Tuesday, February 19, 2019, at Crystal Heights Care Center in Oskaloosa. Adeline Van Mersbergen, daughter of Herman and Sietska (Terpstra) Van Mersbergen, was born at the home of her parents near Sully, Iowa. As a youngster in a large farm family, Adeline helped with the many chores on the family farm. She attended country school through the eighth grade and later earned her G.E.D. She married Warren Eveland, January 6, 1949, at the First Christian Reformed Church in Oskaloosa. They rented three different farms in southwest Jefferson Township, before they purchased their farm, also in Jefferson Township, in 1966. In the early years of their marriage, Adeline worked at the Continental Overall Factory in Oskaloosa. Later, she wallpapered and painted, both for homes and businesses. Adeline was a charter member of Bethel Christian Reformed Church; she also helped at the Coal Creek Church’s Bible School. Adeline also did home care for several years for the elderly. In her spare time, Adeline enjoyed playing the piano and crocheting. Her family includes her husband of 70 years, Warren; sons and daughters-in-law: Duane and Elaine Eveland, Eugene and Gloria Eveland and Debra Eveland, all of Oskaloosa; eight grandchildren: James (Shelli) Eveland and Brian (Jody) Eveland, all of Eddyville, Eric Eveland (long-time friend, Terrie Richardson) of Oskaloosa, Sara (Dan) McCue of Grinnell, Brenda (Tim) Morrow of Altoona, Jason Eveland of Johnston, Kristen (Paul) Toppin of Waterloo and Jonathan (Rachel) Eveland of Orange City; and 15 great-grandchildren. In addition to her parents, Adeline was preceded in death by her son, Verlan “Fish” Eveland; three brothers and three sisters-in-law: Lawrence and Anna Van Mersbergen, Marius and Marjorie Van Mersbergen and Herman and Anna Mae Van Mersbergen; and three sisters and a brother-in-law: Nellie and Pete Rus and Jenette and Harriet Van Mersbergen. Funeral Services for Adeline will be held at 10:30 a.m., Monday, February 25, 2019, at the Bethel Christian Reformed Church with Rev. Doug Van Der Pol officiating. A Family Prayer Service will be held in the church fellowship hall at 10:15 a.m., before the service. Burial will be in Weldon Cemetery. Visitation will begin at 10 a.m. Sunday, at the Langkamp Funeral Chapel. The family will greet visitors from 2-4 p.m., Sunday afternoon. Memorials can be made to the Oskaloosa Christian School.

Adeline Eveland, 95, of Oskaloosa, passed away Tuesday, February 19, 2019, at Crystal Heights Care Center in Oskaloosa. Adeline Van Mersbergen, daughter of Herman and Sietska (Terpstra) Van Mersbergen, was born at the home of her parents near... View Obituary & Service Information

The family of Adeline Eveland created this Life Tributes page to make it easy to share your memories.

Send flowers to the Eveland family.