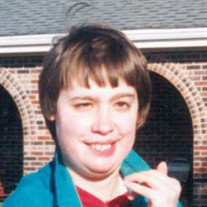 Angela “Angie” Brown, 52, of Pella and formerly of Oskaloosa passed away Wednesday, October 16, 2019, at Mercy Medical Center in Des Moines, Iowa. Angela Michelle Brown was born March 4, 1967, in Oskaloosa. As a youngster, her family moved to Waterloo and then to St. Paul, Minnesota, where she started school. Her family returned to Oskaloosa in 1983, and she continued her education in Ottumwa. When Angie was age 20, she moved to the Christian Opportunity Center in Pella. Angie loved living at COC and loved the many friends and caregivers that became her extended family. She enjoyed attending many outings to musical events and Special Olympics. She also loved spending summer weeks of fun at Camp Sunnyside and Camp Courageous. She was a member of the Calvary Christian Reformed Church in Pella. Her family includes her mother, Marcia Wells of Oskaloosa; her step-father, Michael Freese of Bloomfield; and her siblings: Ashlee (Brent) Taylor of Oskaloosa, Jason (Mallory) Freese of New Sharon and Schawn (Shannon) Freese of Ollie; five nieces: Jaylyn, Taryn, Karling, Saydie, and Alisha; two nephews: Zac and Bronx; several aunts and uncles; and many friends and caregivers at C.O.C. She was preceded in death by her maternal grandparents, Cecil and Juanita Wells. The Family will greet visitors from 5-7 p.m. Friday, October 25, 2019, at Langkamp Funeral Chapel and Crematory. Her body has been cremated, and burial of her ashes will be in Forest Cemetery. Memorial contributions can be made to the Christian Opportunity Center.

The family of Angela Michelle Brown created this Life Tributes page to make it easy to share your memories.

Angela “Angie” Brown, 52, of Pella and formerly of Oskaloosa...