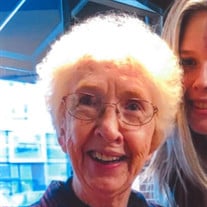 Anita Brady, 87, of Oskaloosa, passed away Saturday evening, February 6, 2021, at Taylor UnityPoint Hospice in Des Moines. Anita Jeanne Brady, daughter of William Jasper and Alberta May (Marshall) Musgrove, was born February 13, 1933, in Oskaloosa, Iowa. Anita was a 1951 graduate of Oskaloosa High School and then went to work for “Ma” Bell Telephone office. Later, Anita worked at Ideal Manufacturing for five years and then was hired at Mahaska Hospital, where she was the head of medical records from 1961 to 1993. She married Robert D. Walker, December 30, 1951, in Oskaloosa. They were the parents of three children, Ron, Debby, and Pam. Robert passed away on July 29, 1983. On July 6, 1997, Anita married Bob Brady in Branson, Missouri. They enjoyed six happy years together before he passed away on April 3, 2003. When Anita’s daughters were young, she coached their softball teams; later, she enjoyed following her children’s and grandchildren’s sporting events and her grandson, Kris Walker’s racing events. She was a long-standing member of the Eagle’s Lodge, American Legion, and the V.F.W. Her family includes her children, Ron (Cathy) Walker of Oskaloosa, Debby (Don) Wensel of Des Moines, and Pam (Bill) Gibbons of Johnston, Iowa; five grandchildren: Dennis (Stephanie) Walker of Greer, S.C., Kris (Julie) Walker of Oskaloosa, Chyna Roelens of Des Moines, Jessica (Ryan) Haugo of Waukee, and Danielle (Stephen) West of Waukee; eight great-grandchildren: Brandon, Jacob, Jaylyn, Brett, Brooks, Sawyer, Hunter, and Emersyn; a great-great-granddaughter, Olyvia; two brothers: Jerry (Sharon) Musgrove of Columbus City, IA and Brian (Maria) Musgrove of Columbus Junction, IA; a sister, Tonya (Ted) Bellon of Mt. Sterling, IA; and a half-brother, Billy Jay Musgrove of Andover, IL. In addition to her parents and both of her husbands, Anita was preceded in death by two sisters: Nadia Crook and Sue Blank; three brothers: Calvin and Bill Musgrove; and an infant brother, Keith; and a special friend, Jack Stout. Funeral services for Anita will be held at 10:30 a.m., Friday, February 12, at Langkamp Funeral Chapel & Crematory. Burial will be in Forest Cemetery. Visitation will be held from 11 a.m. to 7 p.m. on Thursday at Langkamp Funeral Chapel. Social distancing and appropriate personal protective equipment are advised for attending this public event. The service will be available to view on the Langkamp Funeral Chapel’s YouTube channel Friday afternoon for those unable to attend the ceremony. Memorial contributions can be made to the Eagles Lodge in Oskaloosa or the V.F. W. #2237 in Oskaloosa.

The family of Anita Brady created this Life Tributes page to make it easy to share your memories.

Send flowers to the Brady family.