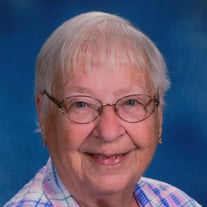 Ann Schultz, 91, of Oskaloosa passed away Tuesday, October 22, 2019, at Crystal Heights Care Center in Oskaloosa. Antonette “Ann” Marie Schultz was born November 18, 1928, to Julius B. and Mayme Matilda (Kautch) Erhart, in Merrill, Wisconsin. She attended Martin Luthern College in New Olhm, Wisconsin and earned her parochial degree in teaching. Ann’s father was an Evangelical Lutheran pastor and moved to Oskaloosa, where he started the Grace Evangelical Lutheran Church in 1945. Ann moved with the family to Oskaloosa and met Robert “Bob” J. Schultz at her father’s church; they were married December 25, 1948. They made their home in Oskaloosa where Bob served as a fireman, and Ann was soon the busy mother of three daughters. In 1961, she began working for the school lunch program and remained with the school for 13 years. Ann was a skilled seamstress and designated a room in her home as her sewing shop. She served many clients through the years sewing garments and doing alterations. Her grandson fondly remembers spending time with grandma in her shop where she passed her sewing expertise onto him. When Bob was promoted to Fire Marshall, he and Ann moved to Mount Pleasant in 1972 and then to Altoona. They returned to Oskaloosa in 1982. Ann worked as a curator for the Nelson Pioneer Farm from 1988 - 1993. She also worked at McDonald's for a time. Ann was a charter member of Grace Lutheran Church where she taught Sunday school and Bible school and was active in the Ladies Aid and the church choir. Her family includes her three daughters: Roberta Schultz of Burlington, Iowa, Kathryn (Wayne) Booy of Oskaloosa and Elizabeth McDonald of Harrison, Michigan; four grandchildren: Susan (Ben) Negley of Oskaloosa, Kristina (David) Simmons of Mountain Home, Arkansas, Eugene (Andrea) Schultz of Daphne, Alabama and Michael (Tonya) Den Hartog of Oskaloosa; nine great-grandchildren, four great-great-grandchildren, and three sisters: Pat Robinson of Lubbock, Texas, Mary Schlawin of Kirkwood, Missouri, and Paula Livingston of Ballwin, Missouri. In addition to her parents, Ann was preceded in death by her husband, Bob, on October 14, 1995, and a sister, Celestine Aalbers. Funeral services for Ann will be held at 1:30 p.m., Friday, October 25, 2019, at Grace Evangelical Lutheran Church with Rev. Roger Neumann officiating. Burial will be in Forest Cemetery. Visitation will begin after 11 a.m., Thursday, at Langkamp Funeral Chapel. The family will greet visitors from 5-7 p.m. Memorial can be made to Grace Evangelical Lutheran Church.

The family of Ann Schultz created this Life Tributes page to make it easy to share your memories.

Send flowers to the Schultz family.