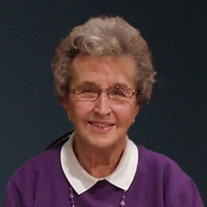 Anna Kelderman, 92, of Oskaloosa, passed away Thursday, February 10, 2022, at the Mahaska Health Hospice Serenity House in Oskaloosa. Anna Elizabeth Kelderman was born November 14, 1929, at the rural Oskaloosa home of her parents. She was the 10th of 14 children born to William and Jennie (Bouma) Van Weelden. Growing up on a farm with a large family taught her the values of working hard and having a serving attitude to others. She had a very close bond with all her siblings through life and called them often as they lived into their senior years. She attended the Star Country School near her home then the Oskaloosa High School. Anna married Richard Kelderman on November 18, 1948, at her parents’ home in Oskaloosa. They made their home there, where she stayed home to raise their four children. Anna enjoyed serving her family and taking care of the household. She kept busy sewing, canning, and freezing garden produce as well as baking. Her fruit turnovers were a big hit in her kids’ lunch boxes. She did various side jobs like hanging wallpaper with her sister Sylvia, and they enjoyed working together. Her first official job was on the first crew of Lil Duffer working the lunch hour. She later worked at Needle Woman Fabrics using her sewing skills. In 1983 Anna and Richard moved to Mesa, AZ, and in 1999 they split their time between Mesa and Oskaloosa. While living in Arizona, they were members of the Christ Community Church in Chandler, where Anna was actively involved, including teaching Children’s Church for many years. While residing in Oskaloosa, Anna was a member of the Bethel Christian Reformed Church, where she was active in the Ladies Bible Hour and other programs. In 2013 Anna returned to Oskaloosa to live full time and be closer to her children. She enjoyed playing cards with her family and friends and seeing her grandchildren. She always found time to visit loved ones in nursing homes. Her family includes her children and their spouses: her sons: Richard “Rick” Kelderman of Oskaloosa, Vernon and Kris Kelderman of Kirkville, IA, and their children: Eric (Lisa) Kelderman, Erin (Kerby) Worley, and Ezra Kelderman; her daughters: Jean Chance of Oskaloosa and her children: Jodie Strommen and Jason (Michelle) Stout; and Karen and Chuck Converse of Oskaloosa and their children: Cole Converse, Courtney (David) Kalina and Conner Converse; seven great-grandchildren: Destinee Stout (Esau), Orrin, Aidan, and Asher Kelderman, Rebecca and Rachel Stout, Olivia Vega and one due by Courtney in July. Destinee is due in June with the first great-great-grandchild. She is also survived by her brother: Harold (Eileen) Van Weelden of Oskaloosa; and her sister, Frances (Les) Spoelstra of Redlands, CA. In addition to her parents, Anna was preceded in death by her husband Richard of almost 54 years; a son-in-law, George Chance; and eleven siblings: John, Henry, Rev. James, William Jr., Ray, Peter and Ernie Van Weelden, Sylvia Kelderman, Dorothy DeRonde, Jean Boender and an infant brother. Funeral services will be held at 10:30 a.m., Saturday, February 19, 2022, at Bethel Christian Reformed Church in Oskaloosa, with Rev. Doug Van Der Pol officiating. The burial will be in Forest Cemetery. Visitation will begin at 11 a.m., Friday, February 18, at Langkamp Funeral Chapel. The family will greet visitors from 4 -6:30 p.m. Memorial contributions can be made to Oskaloosa Christian School.

Anna Kelderman, 92, of Oskaloosa, passed away Thursday, February 10, 2022, at the Mahaska Health Hospice Serenity House in Oskaloosa. Anna Elizabeth Kelderman was born November 14, 1929, at the rural Oskaloosa home of her parents. She was... View Obituary & Service Information

The family of Anna Elizabeth Kelderman created this Life Tributes page to make it easy to share your memories.