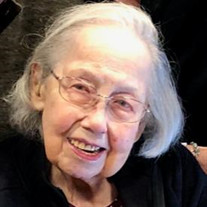 Annabelle “Anne” (Adams) McLandsborough, 92, passed away Saturday, February 19, 2022, at Northern Mahaska Specialty Care in Oskaloosa, IA. Anne was born on October 22, 1929, in Chicago, Illinois, the youngest daughter to William Adams and Ruth F. Potter. Anne moved with her mother and two sisters to Oskaloosa at the age of four. Her family lived with her grandparents next to the Oskaloosa library, where her love of books and history began. Anne graduated from Oskaloosa High School in 1948. Anne was united in marriage to Ed McLandsborough on September 1, 1951. They made their home on the family farm northeast of Oskaloosa. When first moving to the farm, Anne would admit that it was a definite lifestyle change and one that took some getting used to. In the first year, she said she had her laundry basket packed many times to move back to town, but her mother didn’t raise a quitter, so she stuck it out. After 65 years of marriage and raising four kids, she thought she had made the right choice. Anne started working at the YMCA-YWCA as a secretary in 1969 and then went to work at to Auditor’s office at the Mahaska County Courthouse until her retirement. Our mother loved many things about her life. First and foremost was her family. Since the loss of her husband, seeing her kids and grandkids was her only real joy. As mentioned, Anne was an avid reader and very knowledgeable of the history of Mahaska County and Iowa. She was very proud of the Mahaska Co. Courthouse and Bandstand and recited tidbits of their history to anyone that would listen. She read a variety of subjects and was very good at card games and board games. She took delight in crushing her family during a game of Trivial Pursuit or a hand of Uno. Anne and her sisters were raised by a single mother during the depression; because of this, she was very strong-willed and raised her children to be the same. She is preceded in death by her husband, infant son Dean, and granddaughter Kenadee Cox as well her sisters and in-laws. Anne is survived by three sons, David McLandsborough, Littleton CO, Daniel (Marie) McLandsborough, Logan IA, Russell (Jan) McLandsborough, Overland Park, KS. One daughter, Dianne (John) Cox, Kirksville, MO. Grandchildren, Jamie McLandsborough and significant other Skye Sant, Denver CO, Claire (Tom) Delaney, Denver CO, Austin (Keri) McLandsborough, Logan IA, Lauren McLandsborough, Omaha NE, Evan McLandsborough Omaha NE, Maggie (Sam) Findlay, Los Angeles CA, Andrew McLandsborough, Overland Park KS, and Kaleb Cox, Kirksville MO. One great-grandchild, Liam McLandsborough, Logan, IA. Anne’s memorial service will be held at 10:30 a.m., Saturday, March 5, 2022, at Langkamp Funeral Chapel, with Russ McLandsborough officiating. As was her wish, her body has been cremated, and her ashes will be interred at Forest Cemetery. The family will greet visitors from 9:30 a.m. to service time on Saturday. Memorial contributions can be made to Northern Mahaska Nursing and Rehab or Care Initiatives Hospice.

The family of Anne McLandsborough created this Life Tributes page to make it easy to share your memories.

Send flowers to the McLandsborough family.