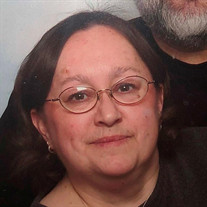 Barb Ide, 66, of Oskaloosa passed away Tuesday, November 26, 2019, at the Mahaska Hospital in Oskaloosa. Barbara Jean Ide, daughter of James Henry and Frances Jean (Brom) Beadle, was born September 4, 1953, in Oskaloosa. Barb attended Oskaloosa schools and was a 1971 graduate of Oskaloosa High School. On June 26, 1971, Barb married her high school sweetheart, James Kater Ide, at the First Christian Church in Oskaloosa. They made their home in Oskaloosa and Barb continued to work as Fareway as a checker, a job she started at age 15. Barb was a devoted employee and cherished the friendships she developed with customers and fellow employees. She remained with Fareway as a checker for 46 years and retired in 2015. Barb was a member of the Good News Chapel; she served as a Sunday school teacher and was involved with the Ladies Ministry and Bible Study group. She enjoyed many excursions to unique places with the ladies from her church. Barb was also an avid sports fan: she loved attending Friday night Oskaloosa Indian Football games and rarely missed a Chicago Cubs event on TV. In retirement, she and Jim enjoyed playing along with The Price is Right and Wheel of Fortune. Barb counted her family as her greatest blessing; she loved gatherings at her home. Tuesday’s were a special delight because that was the day her great-grandson, Carson, spent the day with her and Jim. Her family includes her husband, Jim of 48 years; her daughter and son-in-law, Christine (Tim) Shannon of Oskaloosa; her son, Sean (Anessa) Ide of Oskaloosa; five grandchildren: Katelyn, Stephen and Erin Shannon and Noah and Andalyn Ide; one great-grandson, Carson Vande Kamp; a sister, Karen Linville of Oskaloosa, and two brothers: Terry (Linda) Beadle of Sharon, MA and Dennis (Julie) Beadle of Iowa Falls, Iowa. Barb was preceded in death by her parents and a brother-in-law, Ronnie Linville. Funeral Services for Barb will be held at 10:30 a.m., Saturday, November 30, 2019, at the Langkamp Funeral Chapel with Pastor Alvern Boetsma of the Good News Chapel officiating. Burial will be in Forest Cemetery. Visitation will begin after 11 a.m., Friday, at Langkamp Funeral Chapel; the family will greet visitors from 5-7 p.m. Memorial contributions can be made to the Good News Chapel.

The family of Barbara Ide created this Life Tributes page to make it easy to share your memories.

Send flowers to the Ide family.