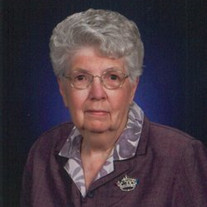 Barbara June Jones, age 87, of Oskaloosa passed away Wednesday, September 6, 2017, at Crystal Heights Care Center in Oskaloosa. Barbara June Jones, daughter of Jim & Irene (Ferguson) Denney, was born February 14, 1930, in rural Mahaska County. She was a 1947 graduate of Oskaloosa High School. June 15, 1947, she married Thomas Richard Jones, and they purchased a 40-acre farm three miles west of Oskaloosa on Hwy 92. The early years were hard ones for the young couple, Tom worked in town, and Barbara kept the farm productive with her large garden, milk cows, hogs, and chickens. They fed their family from the farm, and she will be remembered as an excellent and creative cook. Her chocolate and lemon meringue pies were the best. In 2007, she and Tom sold the house and two acres to their youngest son, and they moved into Oskaloosa. In her spare time, she enjoyed embroidery and bowling. She was a member of the Central United Methodist Church and was a Past Worthy Matron of the Eastern Stars. Her family includes her two daughters: Mary Johnson of Oskaloosa and Connie Pickett of West Des Moines, IA; two sons: Charles (Vicki) Jones of Oskaloosa and Phillip Jones, also of Oskaloosa; seven grandchildren; eight great-grandchildren; a brother, Lloyd (Lubertha) Denney of Oskaloosa; a sister-in-law, Nancy Denney of Waynesville, NC; a brother-in-law, Bob (Violet) Jones and several nieces and nephews She was preceded in death by her parents, her husband, Tom, one grandson, Nick Jones, a son-in-law, Dale Johnson and a brother, Raymond Lee Denney. Funeral Services will be held at 10:30 a.m., Monday, September 11 at Langkamp Funeral Chapel with Rev. Bruce Wittern of Central United Methodist Church officiating. Burial will be in Forest Cemetery. Visitation will begin at noon, Sunday at Langkamp Funeral Chapel; the family will be present from 3-5 p.m. to greet friends and family. Memorials may be made to MHP Hospice Serenity House or Central United Methodist Church.

The family of Barbara June Jones created this Life Tributes page to make it easy to share your memories.