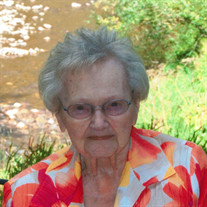 Barbara Life, 91, of Oskaloosa passed away Thursday, July 5, 2018, at the Mahaska Health Partnership Hospice Serenity House in Oskaloosa. Barbara LaVoe Life, daughter of Virgil “Bill” and Irene (McKinney) Shaw, was born August 3, 1926, in rural Mahaska County. The family later moved to Oskaloosa where Barbara attended Oskaloosa Schools. While in Oskaloosa, Barbara met John Life. At that time, John was stationed in Farragut, Idaho as a member of the United States Navy. Barbara and John were married in Farragut, Idaho and remained there until John’s discharge. The couple moved to St. Louis, MO for a short time before returning home to Oskaloosa in 1945, and began their family. In 1950, the family moved to western Texas, where John worked in the oil fields, and Barb took care of the children and the home. In 1956, the family returned to Iowa and settled in Cedar, where they lived in the same home for 54 years. Barb was a member of the Cedar United Methodist Church since 1956, a member of the Women’s Two O’clock Club of Cedar and the Cedar Crusaders. She was an avid reader, flower gardener and enjoyed the occasional trip to Prairie Meadows Casino. Most of all, Barb loved her grandchildren and spending time with her family. Barbara’s family includes her five children: Dr. Dennis (Diana) Life of Tucson, AZ, Greg (Linda) Life of Oskaloosa, IA, Brad (Melinda) Life of Ankeny, IA, Chade (Ivette) Life Ft. Myers, FL and Barbara Jo Life of Nashville, TN; 6 grandchildren: Travis (Ellen) Life of Elmhurst, IL, Brett Life of Marion, IA, Erin (Tom) Bogenski of Des Moines, IA, Sarah (Steven) Jenkins of Nashville, TN, Evan Life of Madison, WI and Marc (Logan) Life of Atlanta, GA; 8 great-grandchildren; two step-grandsons: Zachery and Parker Wagoner of Ankeny, IA; one brother, Burl “Pat” Shaw and one sister, Bonnie Childs, both of Sundown, TX; and two sisters-in-law: Marianne Webb of Coeur d'Alene, ID and Betty Shaw of Levelland, TX. Barb was preceded in death by her parents, her husband, John, three brothers: Bill, Ben, and Bob Shaw, and one great-grandson, Braden Jenkins. Funeral services for Barb will be held at 10:30 a.m., Tuesday, July 10, 2018, at the Cedar United Methodist Church with Pastor Bob Voels officiating. Burial will be in Highland Cemetery in Eddyville, IA. Visitation will begin at 11 a.m., Monday, at Langkamp Funeral Chapel; the family will greet visitors from 5-7 p.m. Monday evening. Memorials may be made to the Cedar United Methodist Church. Langkamp Funeral Chapel has been entrusted with the arrangements. Memories and condolences can be sent to the family by visiting langkampfuneralchapel.com.

The family of Barbara Life created this Life Tributes page to make it easy to share your memories.

Send flowers to the Life family.