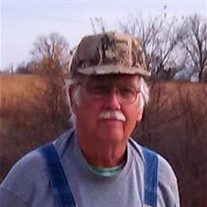 Ben Zugg, 70, of Oskaloosa, passed away Tuesday, April 3, 2018, at the Northern Mahaska Nursing and Rehab Center in Oskaloosa. Benjamin Allen Zugg was born May 1, 1947, in Burlington, Iowa to Arthur Ray and Lela (Werner) Zugg. As a youngster, Ben’s family moved to Thornburg, where he finished grade school. He then attended Tri-County High School and graduated with the class of 1965. He was drafted into Army in July 1965 and served with the military police. Following his discharge in August 1967, Ben continued to service with Iowa National Guard until July of 1972. He married Betty J. Bunnell, July 11, 1969, and they made their home in Eddyville until 1975, when they moved to Oskaloosa. Ben began his career with Clow Valve in 1968. He worked in the machine shop as a tool and die maker, where he was well respected for machining skills and overall capabilities by his supervisors and his peers. Ben served as president for 30 years of the Local Lodge #1498 International Association of Machinist & Aerospace Workers. He also served as secretary/treasurer of the district union. In his spare time, Ben enjoyed flying remote control airplanes, snowmobiling, golfing and playing with his toy trains. His family includes his wife, Betty Zugg of Oskaloosa; a daughter Melissa Curtiss of Oskaloosa; two granddaughters, Alyssa and Krystianna Buesch; and a brother, William A. Zugg of Marshalltown, Iowa. In addition to his parents, Ben was preceded in death by two brothers: Robert and Homer Zugg. As was his wish, Ben’s body has been cremated. A private graveside memorial service will be held at University Park Cemetery in University Park, Iowa. Memorial contributions should be made to the family and will be designated at a later time. Langkamp Funeral Chapel & Crematory has been entrusted with the arrangements. Memories and condolences can be sent to the family by visiting langkampfuneralchapel.com.

Ben Zugg, 70, of Oskaloosa, passed away Tuesday, April 3, 2018, at the Northern Mahaska Nursing and Rehab Center in Oskaloosa. Benjamin Allen Zugg was born May 1, 1947, in Burlington, Iowa to Arthur Ray and Lela (Werner) Zugg. As a youngster,... View Obituary & Service Information

The family of Ben Zugg created this Life Tributes page to make it easy to share your memories.

Send flowers to the Zugg family.