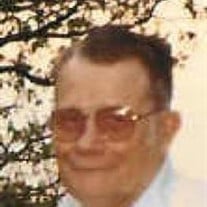 Benny Martin Edgington: Benny passed away Sunday afternoon, May 18, 2003 at the Veteran's Administration Medical Center in Iowa City at the age of 81 years, 3 months and 15 days. Benny's memory is honored by his two sons and their wives: retired C.S.M., U.S. Army, George L. & Marcia Edgington of Dixon, MO and Benny M. & Lorrie Edgington of Oskaloosa; and by a son-in-law, Ronnie McAdoo of Kent, WA. He was blessed with 6 grandchildren and 10 great grandchildren. He is survived by a companion, Leatha Hendricks of Oskaloosa; and two sisters & their husbands: Donna & Wilbur Lieber and Roberta & Charles Oeklerking, all of Sioux City, IA. Benny Martin Edgington, son of Luther Martin & Helen Elizabeth Morian Edgington was born Feb. 3, 1922 in Fort Walthill, NE. Raised and educated in Fort Walthill, he was inducted into the United States Army on Nov. 24, 1942 in Fort Crook, NE. He served as an Ammunitions Handler; he was discharged on Jan. 1, 1946 at Fort Leavenworth, KS as a Private First Class after serving in Northern France, the Ardennes, Rhineland and Central Europe and receiving the Bronze Star. Benny went to Seattle, WA and worked in the shipyards, before coming to Iowa, where he worked in construction and later as a farmer. In 1961, Benny was injured in a farming accident and underwent extensive rehabilitation for a leg injury. Benny then started the Ben's Shoe Repair, which he owned and operated for 20 years, retiring in the early 80's. Benny married Frances Mae Melton on October 16, 1946 in Dakota City, NE; she passed away on Nov. 13, 1989. Benny was a member of the V.F.W. and the Eagles Lodge and he enjoyed camping. He was preceded in death by his wife; a daughter, Darlene L. McAdoo; a sister, Eileen Edgington and a brother, Don Edgington. PDF Printable Version

Benny Martin Edgington: Benny passed away Sunday afternoon, May 18, 2003 at the Veteran's Administration Medical Center in Iowa City at the age of 81 years, 3 months and 15 days. Benny's memory is honored by his two sons and their wives: retired... View Obituary & Service Information

The family of Benny Martin Edgington created this Life Tributes page to make it easy to share your memories.

Send flowers to the Edgington family.