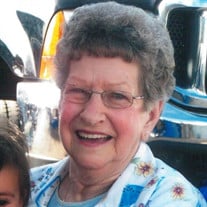 Bernice Ames Gleason, 90, Fairfield, Iowa, and formerly of LeClair, Iowa and Green City, Missouri, passed away Wednesday afternoon, April 1, 2020, at the Mahaska Health Hospice Serenity House in Oskaloosa, Iowa. Bernice Virginia Gleason, daughter of Clarence and Ruth (Jones) Ames, was born November 15, 1929, at the home of her parents in rural Sullivan County near Green City, Missouri. She was the youngest of five children and attended Red Brush School as a youngster. Following her education, she worked with her parents on the farm and later found work in Kirksville. It was there that she met her husband, Merle Gleason. They married January 31, 1949, and resided in Kirksville for the first two years of their marriage. A job for Merle with Alcoa Aluminum in Bettendorf brought the family to Iowa. They lived in LeClair, Iowa. Bernice’s primary vocation was homemaker and mother, but she also worked as a secretary for a clothing store in Davenport for a time. In 1994, Bernice moved to Fairfield, Iowa, to be near her sister, Alice. While living there, she worked part-time for the Department of Human Services. Bernice loved getting together with friends and family; playing cards was one of her favorite pastimes in addition to crocheting and cross-stitch. She was known fondly as “Aunt Bea” to her sibling’s families; she loved many and was loved by many. Bernice is survived by her son-in-law, Greg Hackler of Winslow, AZ; two grandchildren and their spouses: Kris and Diana Hackler of Key West, Florida and Beth and Drew Davis of Needles, California: three great-grandchildren: Cielo and Jett Hackler and Hayes Davis; her niece and caregiver, Sharon (John) Mahaffey of Kirkville, Iowa; and many other nieces and nephews and great-nieces and great-nephews. In addition to her parents and her husband, Bernice was preceded in death by twin sons: Donald Lee and Dwight Leon Gleason; a daughter, Connie Hackler; her siblings: Irene Catlett, Alice Hopper, Harry Ames, and Marie Walker. Due to the restrictions put in place by the Department of Public Health due to the COVID 19 Pandemic, private family graveside services will be held at Mount Olivet Cemetery in Green City, Missouri. Memorial contributions can be made to the Mahaska Health Foundation for the Hospice Serenity House. Langkamp Funeral Chapel of Oskaloosa, Iowa, is handling the arrangements.

The family of Bernice Ames Gleason created this Life Tributes page to make it easy to share your memories.

Send flowers to the Gleason family.