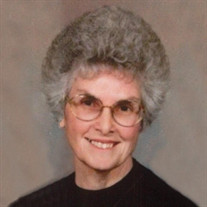 Billie Allgood, 82, of Beacon passed away Sunday evening, January 2, 2022, at the Mahaska Health Hospice Serenity House. Billie Gwen Allgood, daughter of Raymond Herbert and Madeline Bernice (Quarton) Hurst, was born April 13, 1939, in Oskaloosa, Iowa. She was raised in Oskaloosa and was a 1957 graduate of Oskaloosa High School. Following her education, she was employed at Dean’s Cigar Store. As a young single lady in Oskaloosa, she met and fell in love with a young sailor, Ernest Allgood, home on leave from the Navy. On March 1, 1965, they married at First Christian Church in Oskaloosa and made their home in Beacon. Billie was a full-time homemaker and mother after their marriage. Billie attended Beacon United Methodist Church and, most recently, Faith Community Church in Eddyville. Her love of God was evident through her devotion to Bible studies with friends and her many visits to nursing home residents. She loved her family dearly and will be remembered as a loving mother and grandmother. Her family includes her children: a son and daughter-in-law, Ernie Jr. and Mishelle Allgood of Oskaloosa; two daughters: Debbie Allgood of Oskaloosa and Mary Wanders of Oskaloosa; six grandchildren: Samantha (Adam) DeBruin, Shelby Allgood, Seth, and Keegan McCallum and Alex and Madison Wanders, all of Oskaloosa; four great-grandchildren, Peyton, Brynlee, Taelynn, and Cooper; a brother and sister-in-law, Leroy “Bub” and Lois Hurst of Oskaloosa; one sister-in-law: Dorothy Hurst of Wisconsin; and several nieces and nephews. In addition to her parents and her husband of 51 years, Ernie, on November 4, 2016, she was preceded in death by two brothers: Raymond “Junior” and T. Bradford “Sonny” Hurst; and four sisters: Phyllis Stigers, Nadyene Johns, Dixie Hurst, and Hope Proctor. Billie’s funeral service will be held at 10:30 a.m., Wednesday, January 5, 2022, at Langkamp Funeral Chapel with Rev. Dan Visser of Eddyville Faith Community Church officiating. The burial will be in Forest Cemetery. Visitation will begin after 1 p.m. on Tuesday; the family will greet visitors from 4-6 p.m. Memorials can be made to Mahaska Health Hospice Serenity House.

The family of Billie Gwen Allgood created this Life Tributes page to make it easy to share your memories.

Send flowers to the Allgood family.