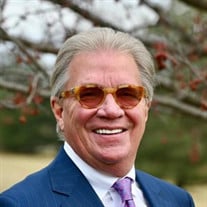 On Monday, January 18th, 2021, Blair J. Van Zetten, loving husband and father, passed away at age 68 at Honor Health, Shea Medical Center in Scottsdale, AZ. On June 24th, 1952, Blair was born in Oskaloosa, Iowa, to Marion and John Van Zetten. He attended Culver Military Academy, and as he got older, he became a counselor for their summer camps. After graduating from Oskaloosa High School, he received his B.A. in Business at Upper Iowa University in Fayette, Iowa. Upon the death of his father in 1980, Blair took control of Oskaloosa Food Products. On June 14th, 1975, Blair married Wendy A. Davis, of Syracuse, New York. Together, they raised three sons, Jason, Brandon, and Travis, in Oskaloosa. Although Blair had many interests, he enjoyed, participated in, and supported: University of Iowa football and basketball, golf, downhill skiing, and any sports in which his family participated. His biggest passion, love, and hobby was Oskaloosa Food Products. He was dedicated to the egg industry and voluntarily served on many boards to ensure that it expanded and globally advanced for all. He served on many related boards during his career, including the United Egg Association and the American Egg Board (AEB), the marketing board for the U.S. egg industry. For over two decades he served in various roles, including that of AEB Chairman. Highlights of Blair’s tenure at the AEB include his presentation of the Commemorative Easter Egg before two Presidents of the United States and First Ladies, on behalf of the entire egg industry. Traveling to Cuba as part of a delegation of commodity leaders and leading the AEB through a particularly tumultuous period in its history, and then working to modernize the AEB, including moving AEB to a new professional office, were just a few of his contributions. In recognition of Blair’s unparalleled actions and friendship, AEB then chose to dedicate and name its conference room as the “Blair Van Zetten Conference Room.” He was a board member of the United Egg Producers and served as the board’s treasurer for the U.S. Farmers and Ranchers Alliance. As a founding member of the Iowa State University Egg Industry Center Board, Blair acted as its first chair serving from 2008-2011. On the Iowa State Campus, Blair was known as “Mr. Egg” and played a pivotal role in enhancing the teaching and research of poultry science. Through his leadership positions, he worked very hard to make Iowa State University a better place to study and expand poultry science. He was a member of the College of Agriculture and Life Science’ Dean’s Advisory Council and served on the search committee that selected the current college’s dean. In 2020, Blair was given the highest honor by Iowa State University through the ISU Alumni Association to individuals who are not graduates of Iowa State University and made significant contributions to Iowa State’s welfare, reputation, prestige, and pursuit of excellence. He was an active and committed member of EIC and served as its Vice-Chair. Blair was named Urner Barry’s Egg Person of the Year in 2016 and was inducted into the Iowa Poultry Association Hall of Fame in 2019. He served as the past-president for the Oskaloosa Chamber of Commerce, the Oskaloosa Community Development Board, and the Forest Cemetery Board. He is a past-chair of the TruBank Board of Directors. He served as an elder in the First Presbyterian Church and was named Oskaloosa Citizen of The Year. Blair’s family includes his wife, Wendy, and his three sons, Jason, Brandon, and Travis; three grandchildren: Driver, Aunya, and Beahr. He is also survived by his sister, Cheryl Van Zetten, and many cousins. Blair was preceded in death by his father, John, and his mother, Marion. Funeral Services for Blair will be held at 10:30 a.m., Tuesday, January 26th, 2021, at the First Presbyterian Church in Oskaloosa, with Rev. John White officiating. The service will be live-streamed on the First Presbyterian Oskaloosa Facebook page. Burial will be in Forest Cemetery. Visitation will begin at 11 a.m., Monday, at Langkamp Funeral Chapel; the family will greet visitors from 4-7 p.m. According to the rules put in place by the Iowa Department of Public Health, proper social distancing and appropriate personal protective equipment are required for attending these public events. The Van Zetten family is respectful and understanding of your decisions regarding COVID-19 and attending Blair’s service. Your health and safety are foremost in their minds. Memorial contributions to honor Blair’s life and service can be made to the Blair Van Zetten Memorial; designation will be made later. Please send contributions to Langkamp Funeral Chapel 2116 N. 3rd ST Oskaloosa, IA 52577. Those wishing to make overnight accommodations should contact the Fairfield Inn and Suites by Marriott in Oskaloosa and ask to book under the Van Zetten block. Phone: 641-676-7600 https://www.marriott.com/hotels/travel/dsmfo-fairfield-inn-and-suites-oskaloosa/?scid=45f93f1b-bd77-45c9-8dab 83b6a417f6fe&y_source=1_MTUxNDk1OTYtNDYyLWxvY2F0aW9uLndlYnNpdGU=

The family of Blair John Van Zetten created this Life Tributes page to make it easy to share your memories.