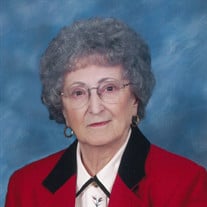 Blanche Havener, 97, of Oskaloosa passed away Friday evening, October 12, 2018, at her home in Oskaloosa. Blanche Lillian (Gotta) Havener was born on January 3, 1921, in Lovilia, Iowa. Her parents were Dominic Gotta and Clarissa (Newton) Gotta. Her father emigrated from Genoa, Italy; he was a coal miner in and around Lovilla. Blanche’s mother passed away from pneumonia when she was 7. At the age of 9, Dominic was killed in a mine accident. Blanche lived with her grandparents until their death and then lived with her aunt and uncle with eight other children. Her uncle was also a coal miner. Life was tough during the Depression. At 15, she decided to leave high school and moved in with her married sister. Later, at 16, she went to work in Oskaloosa at the Overall Factory. At 18, she married Paul Havener in 1939. Paul and Blanche lived on his family farm near Tracy, Iowa. She was a small 85-pound woman, yet a hard working farm wife and mother of two children, Dennis and Paulette. Around 1960, they moved to University Park, and Paul farmed around Cedar. Paul and Blanche became members of the First Christian Church, and their faith carried them through 72 years together. She and Paul were preceded in death by their son, Dennis, who died at the age of 13 in a tragic home accident. Again, their faith and commitment to each other helped them to prevail. Paul and Blanche left a strong legacy; they were always hard workers and were successful in farming. In addition to her parents and her son Dennis, Blanche was preceded in death by Paul in 2012 and her three siblings, John Gotta, Mayme (Gotta) Winegardner, and Gene Gotta. Blanche's memory is cherished by her daughter, Paulette of Oconomowoc, WI; the grandchildren, and great-grandchildren: Angela Simons Risch and her husband, David, and children: Jack and Joey Risch of Nashota, WI; Joseph Simons and his wife, Cindy, of Pewaukee, WI; Sara Simons Fearn and her husband, Kenny and children: Teddy, and soon a baby girl of Kansas City, MO. She is also survived by dearly loved nephews and their wives: Charles and Jane Havener, Don and Connie Havener, Alan and Robin Gotta; a niece, Denise Gotta; and dearly loved grandnieces: Lora Hoit and Debra Hoit. Betty Kaufman, her caregiver, was also a beloved friend. We are all grateful to God that He has blessed Blanche in her life and for His compassion in her passing. We Love You Momma. Love, Your Daughter, Paulette. Funeral service for Blanche will be at 11 a.m., Monday, October 15, 2018, at The First Christian Church in Oskaloosa with Pastor Molly Goodrich and Pastor Alvern Boetsma officiating. Private burial will be in Forest Cemetery. Visitation will be held from at 10 a.m. to service time Monday morning at the church. Langkamp Funeral Chapel is handling the arrangements. Memorial contributions can be made to the First Christian Church, The American Cancer Society, the Susan B. Komen Foundation, or the Ecumenical Food Cupboard in Oskaloosa. Send memories and condolences to the family by visiting langkampfuneralchapel.com.

The family of Blanche Havener created this Life Tributes page to make it easy to share your memories.

Send flowers to the Havener family.