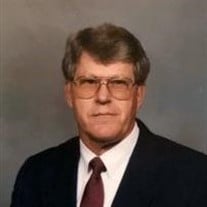 Bob Adams, 89, of Fairfield and formerly of Oskaloosa passed away Saturday evening, January 5, 2019, at the Jefferson County Health Center in Fairfield. Bobby Dean Adams, son of Warden Glenco and Veda (McIntosh) Adams, was born April 18, 1929, in New Virginia, Iowa. Bob was 1946 graduate of New Virginia High School. He joined the Naval Reserves in 1947 and during this time also worked at Solar Aircraft in Des Moines as a quality control engineer. In 1951, Bob was called to active duty in the Korean War and served total of eight years. He returned to Solar Aircraft following his discharge and worked there until the plant closed in 1959. Living in Indianola at the time, Bob went to work as an agent for Warren County Farm Bureau Insurance. In 1960, he was promoted and was transferred to Mahaska County to manage the agency in Oskaloosa. He remained with the company for three years and in 1963, bought the Gamble’s Store in Oskaloosa. Bob owned and operated Gambles until 1981, at which time he sold the business to Doug Swim. One of Bob’s passions was drawing and painting, and after selling the store to Doug, he continued to operate his art gallery/framing business within the store until 2011, when he sold it to Dave Boender. Bob married Mary Alice Nine, November 6, 1949, in Medora, Iowa. And after 31 short years, she passed away, September 25, 1981. He was blessed to find love a second time and married Donna Marie (Shepherd) Fulton, June 5, 1982, in Oskaloosa. Bob was a member of the St. Paul Congregational United Church of Christ where he sang in the choir for many years. He later transferred his membership to the First Presbyterian Church in Oskaloosa. Bob was an American Legion member and a past Mason; he was also a member of Elmhurst Country Club where he served on the board and enjoyed golfing with his friends. While his children were small, he coached Little League. Birds were Bob’s favorite subject to draw and paint, but he found beauty in all of nature and in addition to his artwork, Bob enjoyed hunting and fishing. Family was very important to Bob; he loved being surrounded by his children, grandchildren, and great-grandchildren and after his marriage to Donna, her family as well. He entertained the family playing his harmonica, piano, trumpet, and guitar at many family gatherings. In July 2014, Bob and Donna moved to Fairfield. His family includes his wife, Donna of Fairfield; his children and their spouses: Dr. Bradley (Diana) Adams of Austin, TX, Marcia (Dr. Patrick) Crocker of Medina, TX, Julie (Mark) Armstrong of Marion, IA, Kathryn (Alan) Love of Libertyville, IA, Kay (Tom) Atwood also of Libertyville, Craig (Joan) Fulton of Fairfield, IA, Kristie (Steve) Mitrisin of Columbia, MO, and Karla (Dennis) Whitaker of Centralia, MO; 22 grandchildren and 24 great-grandchildren. In addition to his parents and his first wife, Mary Alice, Bob was preceded in death by an infant daughter, Patricia Lee and a sister, Marie Thompson. Funeral Services for Bob will be held at 11 a.m., Friday, January 11, 2019, at the First Presbyterian Church in Oskaloosa with Pastor J.D. Boatman of the Faith United Methodist Church of Libertyville, IA officiating. Visitation will be held from 10 a.m. – 7 p.m., Thursday, January 10, 2019, at Langkamp Funeral Chapel. The family will greet visitors from 10 a.m. to service time on Friday morning. Cremation will follow the service and burial will be at a later date. Memorials can be made in to the First Presbyterian Church in Oskaloosa or Faith United Methodist Church in Libertyville, IA.

The family of Bob Adams created this Life Tributes page to make it easy to share your memories.

Bob Adams, 89, of Fairfield and formerly of Oskaloosa passed...

Send flowers to the Adams family.