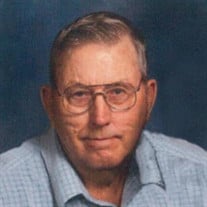 Robert “Bob” Ellis, 86, of Oskaloosa, passed away Sunday, September 26, 2021, at UnityPoint Health – Methodist Medical Center, Des Moines, Iowa. Bob was born December 3, 1934, to Melville and Mary (Chilton) Ellis on the family farm near Givin, Iowa. He attended Sandridge, a one-room schoolhouse, for grades 1-8, and then attended Oskaloosa High School, from which he graduated in 1953. He attended William Penn College, majored in mathematics, and took additional credit hours at Drake University in Des Moines. He graduated in 1957 and then spent two years in the Army fulfilling his military commitment. While he was at Penn, Bob met his future wife, Elizabeth Ellsworth. They were married on June 22, 1959, in Sully, Iowa, with her father officiating. Bob farmed with his dad on the family farm near Givin and also worked at the Pella Window Company (formerly Rolscreen). Later on, Bob drove a school bus for the Eddyville school district. Bob was an outdoorsman and loved hunting, fishing, and hunting for morel mushrooms. He also enjoyed sports; he played football in high school and college and played in the church softball league for many summers. When he had the time, Bob enjoyed watching NFL and Major League Baseball games. Bob is survived by his wife of 62 years, Elizabeth; his daughter, Debbie; his son, Scott; his sister, Marilyn Scott; and many nieces and nephews. He was preceded in death by his parents, his brothers: Willard, Howard, John, and Marion Ellis, and his sister, Wilma Ballinger. A memorial service will be held at 10:30 a.m., Wednesday, October 6, 2021, at Langkamp Funeral Chapel, with Pastor Rodney DeRonde of the Fellowship Bible Church officiating. Burial will be in Forest Cemetery. Visitation will begin at 10 a.m., Tuesday, at the funeral chapel; the family will greet visitors from 4- 6 p.m. Memorials can be made to Fellowship Bible Church.

The family of Bob Ellis created this Life Tributes page to make it easy to share your memories.

Send flowers to the Ellis family.