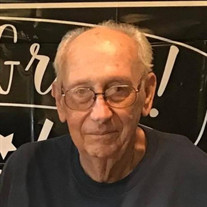 Bob Medlin, 79, of Oskaloosa passed away Monday evening, October 12, 2020, at the Mahaska Health Hospice Serenity House. Robert Dale Medlin, son of George Lyle and Della Marie (Nowlan) Medlin, was born May 27, 1941, in McIntyre, Iowa. Bob attended school in Mason City. August 4, 1959, he enlisted in the Navy and served on the U.S.S. Parsons ED 949, off the Vietnam coast until July 24, 1963. After his discharge, a job in construction brought Bob to Oskaloosa. This was where he met the “love-of-his-life,” Doris Jean Slycord. They were married on September 26, 1964, in Unionville, MO, and made their home in Oskaloosa. Bob continued to work in heavy construction until 1980 when Pella Corp hired him. He worked on the assembly line and made custom windows and doors during his employment for 17 years. He retired in 1997 due to health reasons. Bob was a member of the American Legion, V.F.W., and the Elks Lodge and a past member of the Eagles Lodge. In his spare time, he enjoyed woodworking. Bob’s family includes his wife of 56 years, Doris; his sons: Scott (Rhonda) Medlin and Lyle Medlin, both of Oskaloosa; eight grandchildren: Josh (Krysty) Huffman of Pella, Lindsay (Logan) Ward of Altoona, Jakob Medlin of Vietnam, Zoey (Travis) Marlin of Urbandale, Jenna (Evan) Medlin-Ressler of Omaha, NE, Spencer Medlin of Oskaloosa, and Taylor (Jon) Lindgren of Florida; eight great-grandchildren: Ethan, Ava, Iszac, and Andrew Huffman, Bradley, Cooper, and Harper Ward, and Kayden Beason. He is also survived by his brothers and sisters-in-law: Edward and Marcele Allen of Humboldt, Jerry, and Janice Allen of Mason City, Jim (Barb) Medlin of Mason City, and Ann Medlin of Nora Springs, IA; and a brother-in-law and sister-in-law, Roger and Verla Slycord of Adel. In addition to his parents, Bob was preceded in death by a daughter, Julie Handy; a granddaughter, Brittany Medlin; a sister and brother-in-law, Donna and Wayne Wentworth; a brother, George Medlin; his mother-in-law, Rita Slycord; and a nephew, Eric Slycord. As was his wish, Bob’s body has been cremated. A memorial service will be held at 10:30 a.m., Saturday, November 7, 2020, at Langkamp Funeral Chapel with Pastor Alvern Boetsma of the Good News Chapel officiating. Burial of his ashes will be in Henness Cemetery. Memorials contributions can be made to the United Way of Mahaska County and designate it to the Take-a-Long Weekend Food Program or to Mahaska Health Serenity House.

The family of Bob Medlin created this Life Tributes page to make it easy to share your memories.

Send flowers to the Medlin family.