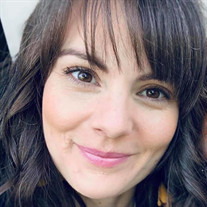 Breanna Brummer, 36, of Oskaloosa passed away Sunday afternoon, October 18, 2020, at Mahaska Health in Oskaloosa. Breanna Lynn Brummer, daughter of Timothy and Pamela (Bryant) Sparks, was born April 10, 1984, in Oskaloosa. Early in her schooling, she attended Oskaloosa Elementary Schools but completed her education through home-schooling. She earned her G.E.D. at age 16, she then attended Iowa Western Community College in Council Bluffs, where she studied Sign Language Interpreting and graduated in 2003. Breanna returned to Oskaloosa and worked for Oskaloosa Community Schools as a Sign Language interpreter. In 2003, at a church softball game, she met her future husband, Eric Brummer. After a two-year courtship, they married on September 3, 2005, at the College Avenue Friends Church in Oskaloosa. They made their home in Lancaster, Missouri, where Breanna worked as a secretary for the Lancaster Christian Church. In 2015, Breanna and Eric moved to Oskaloosa. Her foremost priority in life was her family. She home-schooled her children and was also a Senior Ruby Wellness Coach at Plexus Worldwide. Breanna was a very caring person, and she used her time and abilities to help countless people. Her family includes her husband, Eric, of Oskaloosa; her children: Elizabeth Faith, Jace Legend, and Rogan Creed, all at home in Oskaloosa; her parents, Tim and Pam Sparks of Oskaloosa; her sisters: Heather (Ben) Doak of University Park and Amanda (Tim) Drost of Oskaloosa; her paternal grandparents, Russell and Marie Sparks; 14 nieces and nephews; her husband’s parents, Dennis and Penny Brummer of Glenwood, MO; and a brother-in-law, Anthony Brummer of Columbia, MO. In addition to her maternal grandparents, William and Ardyth Bryant, Breanna was preceded in death by a daughter, Ava Mila. As was her wish, Breanna’s body has been cremated. A visitation will be held from 2 p.m. to 4 p.m., Saturday, October 24 at Langkamp Funeral Chapel & Crematory. According to the rules put in place by the Iowa Department of Public Health, proper social distancing is advised and masks can be worn at your discretion when attending this public event. A Memorial service will be held at a future date. Memorial contributions can be made to her family to be used for her children. Langkamp Funeral Chapel & Crematory is handling the arrangements.

The family of Breanna Lynn Brummer created this Life Tributes page to make it easy to share your memories.

Send flowers to the Brummer family.