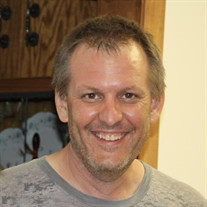 Brian Lourens, 56, of Cedar, passed away Saturday, October 23, 2021, at his home near Cedar. Brian E. Lourens, son of Elvin Ray and Retha June (Stursma) Lourens, was born May 30, 1965 in Oskaloosa. He grew up on his family farm near Cedar. He attended Oskaloosa Christian School and then Pella Christian High School for three years. Brian completed his high school education at Eddyville High School in 1983. Brian was an excellent athlete in his younger years; he excelled at basketball and enjoyed track and field, participating in the 800-meter event. As a young man, he enjoyed boating with his friends at Lake Rathbun and hunting with his coon dog, Levi. Brian farmed with his father a few years before pursuing a degree in computer science at Indian Hills Community College. He initially was employed at Professional Computer Solutions in Ottumwa and then went to work for Southern Iowa Utilities in Bloomfield, Iowa. Brian worked with the utility company for several years before returning to help his father on the family farm. On March 21, 2005, Brian’s life changed dramatically – he became a father. Benjamin Parker Lourens was born and became Brian’s world and the light of his life. He loved fatherhood from the very beginning and treasured every moment with his son. Brian’s home was kid central for a time; together, they set up the wooden trains in the living room, and the matchbox cars could be found in every room. Teaching him to drive the tractors were cherished moments for Brian, and later when Ben could help his dad with the planting and harvest, Brian felt very fulfilled. The two also enjoyed grocery shopping and cooking themselves dinner. Later, they enjoyed days at Fun City in Burlington, playing at the water park, laser tag, bowling, go-carts, and going out to dinner. Brian’s family includes his son, Ben of Mount Pleasant; his parents, Elvin and Retha of Eddyville; his sisters, Gayle Lourens of Grand Ledge, MI, and Angela (Ryan) Judas of Urbandale; three nieces, Aubrey Ekblad and Madison and Taylor Judas; a nephew, John Ekblad; several aunts and uncles; and numerous cousins. As was his wish, Brian’s body will be cremated. A private family memorial service will be held at Forest Cemetery. Langkamp Funeral Chapel & Crematory has been entrusted with Brian’s final arrangements. Memorials can be made to Elvin Lourens for his son, Ben’s educational fund.

Brian Lourens, 56, of Cedar, passed away Saturday, October 23, 2021, at his home near Cedar. Brian E. Lourens, son of Elvin Ray and Retha June (Stursma) Lourens, was born May 30, 1965 in Oskaloosa. He grew up on his family farm near Cedar.... View Obituary & Service Information

The family of Brian Lourens created this Life Tributes page to make it easy to share your memories.

Send flowers to the Lourens family.