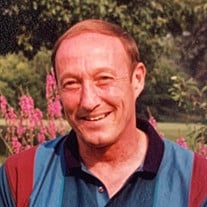 Irwin “Butch” Garland, 79, of Nashville, Tennessee and formerly of Oskaloosa, passed away Sunday afternoon, December 6, 2020, in Nashville, Tennessee. Irwin Harry “Butch” Garland, son of Claude Garland and Nadine White Garland, was born, February 14, 1941, in Davenport, Iowa. The family moved to Oskaloosa when Butch was a child. He was a 1959 graduate of Oskaloosa High School and attended Iowa State University. After his education, Butch worked for several years building pole barns for Bloom Builders. He then opened the Pizza Den, which he operated for ten years. Subsequently, Butch took a job with Warren Bright at Stump Plumbing, and he later purchased the business and operated it for over 30 years. Butch married Barbara Elliott on January 27, 1962, and from this union, four children were born. They later divorced, and Butch spent a significant part of his life with Katherine Vanderwall, of Oskaloosa, Iowa. In 2016, Butch moved to Nashville, Tennessee, and enjoyed his final years with his children, attending events with his grandchildren. He is survived by his children: Susie Garland, Betsy Garland, and her significant other Dan Read, Amy Garland Ware and her husband Wes Ware, and Robert “Fuzz” Garland and his wife Jennifer Garland, his ten grandchildren: Emma, Austin, Megan, Sammi, David, Jacob, Allen, Mallory, Stephen, and Andrew, all of Nashville, Tennessee; and his sister, Pat Pierce, of Elkhorn, Nebraska. Butch was preceded in death by his parents. Graveside funeral services will be held for Butch at 10 a.m., Monday, December 14, 2020, at Forest Cemetery with Rev. Troy Richmond of St. Mary’s Catholic Church officiating. The North 11th Street entrance should be used when attending the service. According to the rules put in place by the Iowa Department of Public Health, proper social distancing and appropriate personal protective equipment are advised for attending this public event. The service will be available to view on the Langkamp Funeral Chapel’s YouTube channel Monday afternoon for those unable to attend the ceremony. Langkamp Funeral Chapel has been entrusted with Butch’s arrangements.

The family of Butch Garland created this Life Tributes page to make it easy to share your memories.

Send flowers to the Garland family.