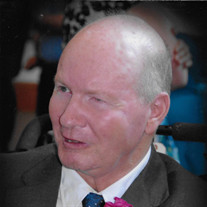 Calvin Stam, 70, of Oskaloosa entered eternal life to be with his Lord and Savior, Jesus Christ, on December 1, 2017, passing away in his home surrounded by family. Calvin Lee Stam was born the first of five children, July 21, 1947, in Mahaska County, Iowa to Albert “Hap” and Wilma (Kelderman) Stam. Calvin was baptized and made his profession of faith at Bethel Christian Reformed Church, Oskaloosa. He received his elementary and high school education in New Sharon and Oskaloosa schools. Upon his graduation from Dordt College, Calvin became the elementary principal at the Christian school in Sibley, Iowa. After that school year, he was drafted and served in Vietnam as a sergeant in the 101st Airborne Division. On June 5, 1971, Calvin was united in marriage to Diane Jo Van Schepen at the First Christian Reformed Church in Hull, Iowa. Both Calvin and Diane taught in Randolph Christian School in Wisconsin before making their home in Oskaloosa, Iowa in 1974. For two years, Calvin served as the principal of Oskaloosa Christian School before starting to farm and being a rural mail carrier. Calvin, Diane, and their four children enjoyed working together in the daily operations of their farm. Calvin enjoyed being physically active and made time to play both volleyball and basketball. Calvin’s faith and dedication to his Lord were evident in his studying of God’s Word, theology, and church history as well in his singing of the Psalms. He loved the church of the Lord Jesus Christ, and he desired it to be a pure bride. He served as both elder and deacon in his church and enjoyed his Sunday afternoon visits to local nursing homes. For many years he was also an active participant in the Sunday afternoon radio program on KBOE. He was a member of Covenant Reformed Church in Pella, Iowa. Those left to cherish his memory are his loving wife of 46 years, Diane Stam of Oskaloosa; two sons and two daughters: Jennifer and Rick Fountain of Kirksville, MO, Nathaniel and Valerie Stam of Oskaloosa, IA, Erin and Calvin Meinders of Pella, IA, and Caleb and Leah Stam of Oskaloosa, IA; 14 grandchildren: Kenny, Bethany, Jenessa, and Joshua Fountain; Jonathan, David, and Lucas Stam; Christopher, Luke, Thomas, Ethan, and Abigail Meinders; Collin and Maria Stam. Calvin leaves four brothers: John (Joyce) Stam, Dennis (Kathy) Stam, Stephen (Sheryl) Stam, and Brent (Phyllis) Stam, all of Oskaloosa, Iowa. Calvin was preceded in death by his parents. Calvin’s burial service will precede the funeral service and will be held at 9:30 a.m. on Dec. 6, 2017 at the Spring Creek Friends Cemetery near 2469 Norwalk Circle, Oskaloosa, IA, with Military Honors by the Oskaloosa Honor Guard. His funeral service will be held at Covenant Reformed Church, located at 2805 Fifield Road in Pella, IA, at 11 a.m. on Dec. 6, 2017, with Rev. Doug Barnes officiating. A family prayer service will be held in Room 103 of the Educational Wing at 10:45 a.m., prior to the service. Visitation will begin at 11 a.m., Tuesday at Langkamp Funeral Chapel; the family will greet visitors from 4-7 p.m., Tuesday evening. In lieu of flowers, memorials can be made to 818 Forward with Faith, Oskaloosa Christian School, or Mahaska Hospice.

Calvin Stam, 70, of Oskaloosa entered eternal life to be with his Lord and Savior, Jesus Christ, on December 1, 2017, passing away in his home surrounded by family. Calvin Lee Stam was born the first of five children, July 21, 1947, in Mahaska... View Obituary & Service Information

The family of Calvin Lee Stam created this Life Tributes page to make it easy to share your memories.

Calvin Stam, 70, of Oskaloosa entered eternal life to be with...

Send flowers to the Stam family.