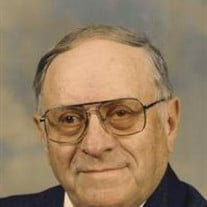 Carl Gilbert Anderson: Carl passed away early Friday morning, Nov. 4, 2005 at his home in Oskaloosa at the age of 85 years, 2 months and 20 days. He is survived by two daughters, Sharon Kay (Gawain) Elliott of Greensboro, GA; Carol Anderson of Iowa City; a son, Richard Anderson of Iowa City, IA; a sister, Marie McCurdy of Ottumwa; three grandsons; four granddaughters; two great grandsons; two great granddaughters; three sisters-in-law; nieces and nephews; cousins; numerous friends; and Mr. & Mrs. Robert Elder, who have been dear helpful friends. Carl Gilbert Anderson, son of Walter E. & Signa A. Larson Anderson, was born August 15, 1920 in Mahaska County. He was a 1939 graduate of Lacey High School. He married Mary M. Todd of Oskaloosa at the Methodist Church in Champaign, IL on April 17, 1942 while he was an instructor at Chanute Air Base in Rantoul, IL. He was inducted into the U.S. Army on Nov. 19, 1942 at Camp Dodge, Iowa. On Dec. 28, 1943 he left Boston for overseas duty, arriving in England 13 days later. He was a member of the 494th Air Service Squadron, attached to the 410th Fighter Bomber Group for General Patton's army in its drive across Europe. He later went to France and served there for a year, returning to the states in late July of 1945. His unit was ordered to deploy to the Pacific after their R & R furlough. Fortunately, the war ended during that furlough. He was discharged on Oct. 18th 1945 at Baer Field, IN. After returning home, Carl worked at various lumber companies and in Dec. 1959, he became co-owner and manager of the Hiawatha Lumber & Builders, Inc. of Hiawatha, IA. He retired from there in September 1978. He and his wife returned to Oskaloosa in 1983, where he has resided since. Carl served as a Hiawatha City Councilman for 7 years; he was a member of St. Paul Congregational United Church of Christ in Oskaloosa, the Optimist Club of Hiawatha, various lumberman organizations; the V.F.W. and the American Legion. He was a past member of the Mahaska County Historical Association, where he served as treasurer. He was preceded in death by his parents, his wife on Feb. 4th 1994, and four brothers: Wilbur in infancy and Robert, Marvin and Wesley Anderson. PDF Printable Version

The family of Carl Gilbert Anderson created this Life Tributes page to make it easy to share your memories.

Send flowers to the Anderson family.