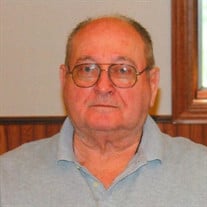 Carlos Ryther, 87, of Oskaloosa and formerly of Versailles, MO passed away Saturday, August 15, 2020 at Crystal Heights Care Center in Oskaloosa, IA. Carlos J. Ryther, son of Harvey Emmerson and Novela Pearl (Lake) Ryther, was born March 9, 1933 in Bellville, Kansas. The family moved to Chillicothe and later to a farm near Avalon, Missouri. He was a 1951 graduate of Avalon High School. He joined the U.S. Marine Corps in 1951 and served two years of active duty and then eight years in the reserves. While serving in the marines, he married Sharon Singleton and to that union his son, Larry was born. They later divorced. Following his discharge, Carlos moved back to Avalon and farmed with his father for two years and then took a job as a salesperson for Lambert Glove Company in Chillicothe. He married Theda Elliott in 1954 in Chillicothe. To this union, Carla and Vicki were born. That same year his position with Lamberts took him to Oskaloosa. While living there he changed jobs and began driving a truck for Oskaloosa Bottling Company. This was the first of many truck driving jobs that Carlos held over the years. He also drove for DRS, Hy-Vee, and Foodliner. Carlos retired from Foodliner in 2009. Carlos lived in Oskaloosa and Versailles, MO throughout his life, it was in Versailles that he also drove a school bus and worked as a home builder. Carlos enjoyed collecting model trains and small building projects. He was a member of Calvary Bible Church in Oskaloosa, formerly attended Bethel Baptist Church in Oskaloosa and the First Baptist Church in Versailles of which he served as a Deacon. His family includes his wife of Theda; his children and their spouses: Larry and Marlene Ryther of Windsor, MO, Carla & Charlie Ridenour of Oskaloosa, Vicki and Jeff Glandon of Madison, MO; step-children and their spouses: Lee and Marge Asher of Grinnell, IA, Charlotte and Rick Caves of Oskaloosa, Jan and Dick Burman of LaSalle, IL and Connie Slechta of Sigourney; a brother and sister-in-law, Gary and Gail Ryther of Excelsior Springs, MO; a sister-in-law, Dot Ryther of Kansas City, KS; 15 grandchildren and 23 great-grandchildren. In addition to his parents, he was preceded in death by his wives, Mary E. Ryther and Sharon Ryther; a step-son, Elliott Lynn Asher and a brother, Dean Ryther. Funeral services for Carlos will be held at 2 p.m., Thursday, August 20, at the Calvary Bible Church with Reverend Doug Smiley officiating. Visitation will begin Thursday at noon at Calvary Bible Church, with the family present from 1 p.m. to service time. Burial will be in Evergreen Cemetery near Leighton with Military Honors by the Oskaloosa Honor Guard. Memorials may be made to Calvary Bible Church. Memories and condolences can be sent to the family by visiting the online guest book at langkampfuneralchapel.com.

The family of Carlos Ryther created this Life Tributes page to make it easy to share your memories.

Carlos Ryther, 87, of Oskaloosa and formerly of Versailles, MO...

Send flowers to the Ryther family.