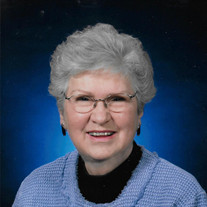 Carol Joyce (Veencamp) Bastemeyer of Clive, Iowa "A woman who embodied the essence of grace." "The epitome of grace and love." "When I think of the image of a beautiful Godly lady, I think of Carol. It is such a privilege to have her as one of my dearest friends in Christ!" Carol was born February 13, 1935, in Sioux Center, Iowa, to Paul and Winnie (DeGroot) Veencamp. She died December 30, 2017, at Iowa Methodist Medical Center, Des Moines, Iowa. Carol attended school in Sioux Center, Iowa, graduating from Sioux Center High School in 1953. She was active in music and cheerleading. Following high school graduation, she enrolled at what was then Northwestern Junior College in Orange City, Iowa, where she met Norman Bastemeyer. They were married in Sioux Center, Iowa on January 22, 1955, while Norman was serving on active duty with the U. S. Navy. Carol graduated from Northwestern in 1956. During Norman's Naval career they lived in California and Illinois. Following that, they returned to the Midwest where they resided in Vermillion, SD, and Denver, CO, before settling in Orange City to raise their family. While there, Carol was active in the community, serving on various committees for the annual Tulip Festival celebrations as well as in the American Reformed Church. She worked part-time as a travel agent, and Carol and Norman had opportunities to enjoy many wonderful trips together through the years. The couple moved to West Des Moines in 1986, and since 2011 have resided at the Walnut Ridge senior retirement home. Carol sustained serious injuries in a toboggan accident as a teenager, which compromised her physical abilities, and the residual effects became more pronounced in her later years. She never complained about this and exhibited a quiet strength and grace in overcoming challenges and her limitations. She preferred to focus attention on others, and made everyone in her presence feel special and cared for. Carol had a warm and welcoming manner that gained her many friends everywhere she lived. Her gentle spirit touched many lives. She was a gracious hostess and loved entertaining. She was an avid bridge player and enjoyed various types of needlework. She founded the Prayer Shawl Ministry at Meredith Drive Reformed Church, sharing comfort and kindness with others who were suffering. Carol was observant and optimistic - she rejoiced in the beauty of the natural world and in the people around her. She loved a good book, music, watching the seasons change, flowers, cookies, dark chocolate, and Tony Bennett. She was a loving and compassionate wife, mother, grandmother, and friend. She will be dearly missed, but very dearly remembered. Carol is survived by her husband, Norman Bastemeyer of Clive, a daughter Connie (Mark) Albers of Northfield, Minnesota, a son Dan Bastemeyer of Iowa City, two grandson, Alex Albers of Crested Butte, Colorado, Drew Albers of Boulder, Colorado, and a brother, John Veencamp of Cherokee, Iowa, as well as nieces and nephews. She was preceded in death by her parents, Paul and Winnie Veencamp, and a brother, Willard Veencamp. A memorial service for Carol will be held at 10:30 a.m., Friday, Jan. 5, 2018, at the Meredith Drive Reformed Church, Des Moines with Rev. Gary Hanson officiating. As was her wish, Carol’s body had been cremated, and burial of her ashes will be in West Lawn Cemetery in Orange City at a later date. Friends may greet the family from 5-7 p.m., Thursday, Jan. 4, at Meredith Drive Reformed Church. Langkamp Funeral Chapel & Crematory in Oskaloosa, IA has been entrusted with her arrangements. Memorials may be made to her church. Memories and condolences may be sent to the family by visiting Carol’s tribute wall at langkampfuneralchapel.com.

Carol Joyce (Veencamp) Bastemeyer of Clive, Iowa "A woman who embodied the essence of grace." "The epitome of grace and love." "When I think of the image of a beautiful Godly lady, I think of Carol. It is such a privilege to have her as one... View Obituary & Service Information

The family of Carol Joyce Bastemeyer created this Life Tributes page to make it easy to share your memories.

Send flowers to the Bastemeyer family.