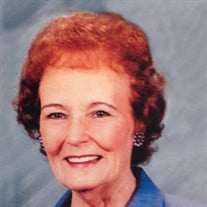 Carol Jean Harsin DeGeest, 92, of Oskaloosa, passed away Thursday, August 26, 2021, at Hospice Serving Davis and Wapello County in Ottumwa, Iowa. Carol was born October 6, 1928, in Centerville, Iowa, to Harold Joseph and Hazel Verdie (Robinson) Clark. Carol began her education in Centerville, and after her family moved to New Sharon, she attended high school in New Sharon, graduating in 1946. Following her education, she worked for Daws Barr as a bookkeeper and secretary. She married Wilbur “Max” Harsin on August 19, 1956, at the New Sharon United Methodist Church. Max farmed, and Carol then stayed home to raise her daughters and help her husband with farming. In 1988, Max suffered a debilitating stroke, and Carol cared for him until his death in 1993. Carol found love a second time when she met Glen DeGeest at church. On October 19, 2002, they married in Tracy and resided in rural Oskaloosa at the end of Goose Lane. They truly enjoyed each day of the almost three and a half years they had together. Glen passed away on March 28, 2006. As a member of Tracy United Methodist Church, she served as treasurer for more than 50 years, and she also served as a soloist for weddings, funerals, and church services. She served as secretary for the United Methodist Women at her church and was also a member of the Order of the Eastern Star. Her family was always her priority, but she also enjoyed fun outings with the Red Hat Ladies, traveling – especially bus trips and winters in Arizona. Her family includes her daughters: Sharon “Shari” (Robert) Alig of Ottumwa and Judith “Judy” (Jim) Sinclair of Ottumwa; four grandchildren: Adam (Alison) Veldhuizen of Toddville, IA, Amary (Shawn) Kerby of Agency, IA, Nichole Barton, (Adam Eddy) of Ottumwa, and Tyler Johnson of Ottumwa; eight great-grandchildren; her step-children: Cherol (Daryl) Brown of Oskaloosa, Glen (Joyce) DeGeest of Oskaloosa, Randy (Christine) DeGeest of Oskaloosa, and Leo (Linda) DeGeest of Taos, New Mexico; Numerous step-grandchildren; and a special friend/sister, Lois Steen of Solon, Iowa. In addition to her parents and her husbands, Carol was preceded in death by a grandson, Andrew Veldhuizen. Carol’s funeral services will be held at 10:30 a.m., Monday, August 30, at Tracy United Methodist Church. Burial will be in Breckenridge Cemetery near Knoxville. Visitation will begin at 10 a.m., Sunday; the family will greet visitors from 2-4 p.m. at Langkamp Funeral Chapel & Crematory. Memorials can be made to Tracy United Methodist Church or Hospice Serving Wapello and Davis Counties.

The family of Carol Harsin DeGeest created this Life Tributes page to make it easy to share your memories.

Send flowers to the DeGeest family.