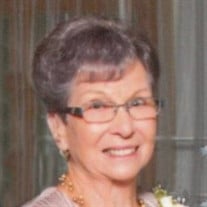 Carol Erteld, 79, of Oskaloosa passed away Wednesday, November 6, 2019, at the Mahaska Health Hospice Serenity House in Oskaloosa. Carol was born in Baring, Missouri, on June 13, 1940, to Francis William and Myrtle Alice (Winn) Fisher. The family moved to the Deep River area when Carol was young, and she attended country school near Deep River through the eighth grade. Carol was a 1958 graduate of Deep River High School; it was there she met her husband, a classmate, Eugene Erteld. Beauty School in Des Moines was her next adventure, and after graduation, she moved to Oskaloosa and began working for Edna Scheuermann at the Modern Beauty Shop. She married her high school sweetheart, June 30, 1961, at the Deep River Presbyterian Church. They made their home in Oskaloosa, where Carol continued to work at the beauty shop until her children were born. In 1980, Edna decided to retire, so Carol bought her equipment and opened a shop in her home. Her children remember this as an ideal arrangement, their mother could follow her passion, but they still had her at home. Carol’s days started very early, accommodating her first client at 6:30 a.m. – this habit continued throughout her life. After her retirement in 2009, she and her good friend, Verna Bolibaugh, walked at 7:30 a.m. five days a week. Carol and Gene loved to travel and would eventually visit all 50 states, early in their marriage they belonged to a motorcycle club that took many trips. Later on, Carol and Gene took motorcycle trips to Canada with their son and daughter-in-law. When Carol and Gene were in their 50’s, they decided the family should take up snow skiing. Along with their children, they experienced the thrill and the fall of learning how to ski. In more recent years, they enjoyed spending up to a month in March on Marco Island, Florida. This excursion gave their daughter a fantastic vacation destination, as well. Gene’s job with Pepsi gave the couple a wonderful trip to Hawaii and also a two week trip to Ireland. Carol’s official job description was beautician, but she indeed created beauty in anything she touched and all she encountered. A drive past her and Gene’s home was a joy to behold – the perfect combination of nature and culture. The lawn was always manicured beautifully with periodic improvements to the landscape, and every season had its decorations tastefully displayed. Carol was the sort of person whose smile and little laugh would brighten your day – she will be missed by all she encountered. Some may have called Carol a perfectionist – this was her expectation for herself, but her children remember her as someone that was an encourager, and they knew her love unconditionally. Carol was a member of the Good News Chapel. Her family includes her husband, Gene of more than 58 years; her son and daughter-in-law, Randy and Pam Erteld of Blue Springs, Missouri, and daughter and deceased son-in-law, Michelle and Scott Parks of Pella; her grandchildren: Holly (Nathan) Nelson of Jefferson, IA, Caleb (Megan) Parks of Carlisle, IA, Katherine Erteld of Vieques, Puerto Rico, Stephanie Erteld of Lees Summitt, Missouri, and Brett Erteld of Kansas City, Missouri; great-grandchildren: Mackenzie Marie Nelson, and Brady Scott Nelson; her mother, Myrtle Fisher of Oskaloosa; and brothers: Myron Fisher of San Antonio, Texas, Mark (Debbie) Fisher of Ottumwa, and Daniel Fisher of Brooklyn, Iowa. In addition to her father, Carol was preceded in death by a brother, Bill Fisher, a sister, Sandra Fisher, an infant brother; and her son-in-law, Scott Parks. Funeral Services for Carol will be held at 10:30 a.m., Saturday, November 9, 2019, at Bethel Christian Reformed Church in Oskaloosa with Pastor Alvern Boetsma of the Good News Chapel officiating. Burial will be in Forest Cemetery. Visitation will begin after 11 a.m., Friday at Langkamp Funeral Chapel; the family will greet visitors from 5-7 p.m. Memorial contributions can be made to the Good News Chapel or the Mahaska Health Hospice Serenity House.

The family of Carol Jean Erteld created this Life Tributes page to make it easy to share your memories.

Send flowers to the Erteld family.