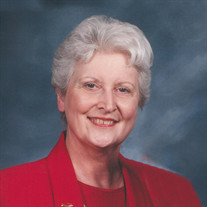 Carol Ludwick, 82, of Oskaloosa, passed away Tuesday, May 11, 2021, at Mahaska Health Hospice Serenity House in Oskaloosa. Carol Lavonne Ludwick, daughter of Calvin Washington and Ethel Elizabeth (Hayes) Jenkins, was born July 1, 1938, in Cedar Rapids, Iowa. She was a 1956 graduate of Roosevelt High School in Cedar Rapids and then began working as a secretary for McNall Machinery. She married the love-of-her-life, William Ludwick, on May 23, 1959, and they remained in the Cedar Rapids area until 1974 when they moved to Oskaloosa. After becoming a mother, Carol quit working outside the home and cared for her children. Shortly after moving to Oskaloosa, Carol and Bill became members of Central United Methodist Church; an administrative assistant position soon became available at the church, and Carol accepted the position. She will be fondly remembered by the members, staff, and community as the efficient and friendly face of Central UMC, running interference for the many pastors that served under her during her 22 years at the church. Carol was a member of the United Methodist Women; she enjoyed researching genealogy, traveling, and most of all – her family. Her family includes her husband, Bill of Oskaloosa; her children: Marcia (Rob) Clarahan of Columbia, MO, Michael (Tammy) Ludwick of Ft. Worth, TX, Michelle Walker of Johnston, IA, and Matthew (Stacia) Ludwick of McKinney, TX; and five grandchildren. Carol is also survived by her siblings: Janice Printen of Kenosha, WI, Calvin Jenkins of Cedar Rapids, IA, and Chris Jenkins of Mission Viejo, CA. In addition to her parents, Carol was preceded in death by her brother, Alan Jenkins. As was Carol’s wish, her body has been cremated. A memorial service will be held at 1 p.m., Friday, May 14 at Central United Methodist Church with Pastor Chad Lierman officiating. A visitation will follow the service at the church. Memorial contributions can be made to the church. Langkamp Funeral Chapel & Crematory has been entrusted with Carol’s final arrangements.

The family of Carol Ludwick created this Life Tributes page to make it easy to share your memories.

Send flowers to the Ludwick family.