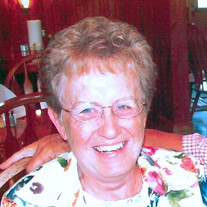 Carol Wagner, 85, of Oskaloosa passed away Monday, May 17, 2021, under hospice care at her home in Oskaloosa. Carol Jean Wagner, daughter of Lauren Preston and Elvira Winifred (Price) Looney, was born May 9, 1936, in Oskaloosa, Iowa. She was a 1954 graduate of Thornburg High School where she enjoyed playing basketball. After her education she began working at Mahaska State Bank (now MidWestOne Bank). She retired from the bank after 40 years in 1997; she worked as a bookkeeper and in the proofing area and 25 of those years in the drive-up bank and in the motor bank areas. October 11, 1959, she married Larry Lee Wagner at the Little Brown Church in Nashua, Iowa. Together they enjoyed caring for their yard and flower gardens, fishing trips and traveling to Branson, Missouri, Las Vegas, Nevada, and a special trip to mark their 60th anniversary. Carol is survived by her husband, Larry and a sister, Lorna Leichsening, both of Oskaloosa; sisters-in-law, Roberta Wagner and Mary (Dave) Garrison, both of Des Moines; and a special friend, Shelly Lobberecht of Oskaloosa. She was preceded in death by her parents. Visitation for Carol will begin at 11 a.m., Thursday, May 20, 2021, at Langkamp Funeral Chapel & Crematory; the family will greet visitors from 4-6 p.m., Thursday afternoon. Cremation will be provided after the service and interment of Carol’s ashes will be held privately at Forest Cemetery. The Wagners would like to extend a heartfelt Thank You to Mahaska Hospice for their care and comfort extended to Carol and the Wagner family in Carol’s final weeks. Memorial contributions can be made to Mahaska Health Foundation for Mahaska Hospice.

Carol Wagner, 85, of Oskaloosa passed away Monday, May 17, 2021, under hospice care at her home in Oskaloosa. Carol Jean Wagner, daughter of Lauren Preston and Elvira Winifred (Price) Looney, was born May 9, 1936, in Oskaloosa, Iowa. She was... View Obituary & Service Information

The family of Carol Jean Wagner created this Life Tributes page to make it easy to share your memories.

Send flowers to the Wagner family.