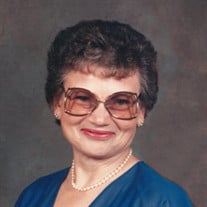 Catherine Brown, 89, of Oskaloosa, passed away Tuesday, December 26, 2017, at Mahaska Health Partnership in Oskaloosa, Iowa. Catherine Loretta Brown, daughter of Homer Charles and Violet Genettie (Myers) Langfitt, was born October 18, 1928, at Indianapolis, Iowa. After attending country school, she worked as a waitress at the Canary Cottage and later at the Continental Overall Factory in Oskaloosa. January 14, 1946, Catherine married the love-of-her-life, Walter Lewis Brown, at the College Avenue Friends Church parsonage. Catherine and Walter made their home in Oskaloosa and Catherine did babysitting in their home. Catherine enjoyed crocheting, embroidery, reading, gardening, and fishing. Her enjoyment of fishing led to a side business for her of assembling fishing lures. When Walter retired in 1983, they had enjoyed spending six months of the year either in California, Texas or Florida. Catherine’s family includes her husband of 71 years, Walter of Oskaloosa; a sister: Roberta Logan of Tucson, AZ; and many nieces and nephews. In addition to her parents, Catherine was preceded in death by five sisters: Marie Holliday, Beatrice Lanphier, Geneva Sheesley and infant sisters, Margaret and Alberta; and three brothers: Charles Langfitt and infant brothers, Francis and Alvin. Funeral Services will be held at 10:30 a.m., Saturday, December 30, at Langkamp Funeral Chapel with Pastor Alvern Boetsma of The Good News Chapel in Oskaloosa. Burial will be in Forest Cemetery. Visitation will begin at 11 a.m., Friday, at the funeral chapel; the family will be present from 4-6 p.m. to greet visitors. Memorials may be made to Mahaska Hospice Services.

The family of Catherine Brown created this Life Tributes page to make it easy to share your memories.