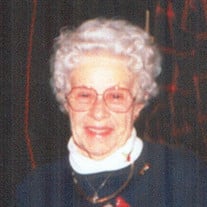 Charlea Terpstra, 92, of Oskaloosa passed away Sunday, May 24, 2020, at Crystal Heights Care Center in Oskaloosa Mildred Charlea Terpstra was born March 20, 1927, in Oskaloosa, Iowa, to Lester “Leo” and Blanche “Marie” (Hartman) Hoit. She attended Star County School West Des Moines Township as a youngster. She began high school in Eddyville and finished at Oskaloosa High School in 1945. Mildred married John Evert Terpstra on her 21st birthday, March 20, 1948, at Central Reformed Church in Oskaloosa. They farmed southwest of Oskaloosa on a place they remained their entire married life. She enjoyed caring for her yard and growing flowers. As a child, her parents always took her to the Iowa State Fair, and that was a tradition that she and John continued with their family. In 1988, they began camping at the fair and continued that tradition through 2010. All of Charlea’s family lives in the Oskaloosa area; they include her sons: Mike Terpstra and Larry (Marva) Terpstra; grandson, Derek (Ronda) Terpstra; great-grandchildren, Seth and Violet Terpstra; step-great-granddaughter, Paige Flynn; and great-step-grandson, Patrick Flynn. She is also survived by three nieces: Jill (Scott) Ewing and their sons: Kyle and Brett, and Laura Hoit, and Debbie Weston, all of Oskaloosa. In addition to her parents and her husband, John on November 13, 2012, she was preceded in death by a sister, Carol (Jim) Bass, and a brother, Hubert Hoit. Graveside Funeral Services for Charlea will be held at 10:30 a.m., Tuesday, May 26, 2020, at Henness Cemetery in Mahaska County with Rev. Bruce Wittern of the Central United Methodist Church officiating. Langkamp Funeral Chapel has been entrusted with her arrangements. Memorial contributions can be made to Central United Methodist Church.

The family of Charlea Terpstra created this Life Tributes page to make it easy to share your memories.

Send flowers to the Terpstra family.