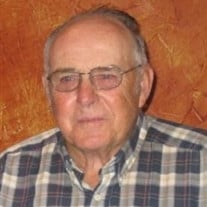 Charles Tyrrel, 80, of New Sharon passed away Thursday morning, September 14, 2017, at the MHP Hospice Serenity House in Oskaloosa. Charles Elmer Tyrrel, son of Harvey Elmer and Maxine (Henry) Tyrrel, was born November 18, 1936, at the Abbott Hospital in Oskaloosa, Iowa. He was raised on a farm near Lacey, where he attended school. He enjoyed playing basketball in junior high school and graduated with the class of 1955. Following his education, he began farming with his father and also joined the U.S. Army National Guard Company D, with whom he served for eight years. July 10, 1960, he married the love-of-his-life, Mary Beth Brunt, in Eddyville. They initially lived in an apartment in Oskaloosa and then in Eddyville, before settling on a farm on Highway 63, south of New Sharon in 1961. In 1970, the couple moved to their farm on Kent Avenue, a place that became their home place. In addition to growing crops, Charles and Mary Beth raised cattle, hogs, chicken, sheep and milked cows. Early on, Charles worked for the Allis-Chalmers Implement Dealer assembling, delivering and working on equipment. He was a gifted carpenter and helped build a church in University Park in addition to building a barn on his farm. He worked at J.C. Penney’s as a clerk for some time and also was always game to help his friend, Reg Wright, with a salvage job. Although he worked many side jobs, he was the epitome of a farmer; he loved the land and passed that love onto his children and grandchildren, who joined him in the operation as they became of age.   Charles retired from farming in 2012 but continued to help and “monitor” as necessary. Because of his strong work ethic, he was a man of few hobbies, considering sports a “waste of time,” unless one of his grandchildren was participating. As he got older and couldn’t continue the strenuous pace he had kept for most of his life; he learned to appreciate the simple beauty and peace of living in the country, just watching the birds and the squirrels. He also enjoyed visiting with friends over a cup of coffee at McDonald's. Charles did enjoy his collection of Allis-Chalmers tractors, his toy tractor, and car collections and watching old westerns.   Charles was a member of the New Sharon Friends Church, where he seldom missed services or Sunday school. Charles family includes his wife, Mary Beth; his children and their spouses: Lynn and Keith Rook of New Sharon, Terry and Donna Tyrrel of Oskaloosa, and James Charles and Sandy Tyrrel of New Sharon; six grandchildren Jared (Amber) Rook of Ankeny, Jordan Rook of Oskaloosa, Braden Tyrrel of New Sharon, Emma Tyrrel of New Sharon, Libby Fenton of Oskaloosa, and Tristan Tyrrel of Oskaloosa; three sisters-in-law, Luane Tyrrel of Polk City, Melinda Dexter of Eddyville and Becky (Rex) Picken of Kansas City, MO; and two special dogs: Angel and Teddy. In addition to his parents, Charles was preceded in death by an infant son, Kerry Elmer Tyrrel; a brother, Jack Tyrrel, a brother-in-law, Gary Brunt and his mother and father-in-law, Keith and Mildred Brunt. Funeral services for Charles will be held at 11 a.m., Saturday morning, September 16, at the New Sharon Friends Church in New Sharon, Iowa, with Rev. Marlene Smith and Rev. David Pinkerton officiating. Burial will be in Forest Cemetery with Military Honors by the Oskaloosa Honor Guard. Visitation will be held from 10 a.m. to 7 p.m., Friday, at Langkamp Funeral Chapel. The family will greet visitors from 10 a.m. to service time on Saturday at the New Sharon Friends Church. Memorials may be made to New Sharon Friends Church or MHP Hospice Serenity House. Langkamp Funeral Chapel has been entrusted with the arrangements. Memories and condolences can be sent to the family by visiting the online guestbook at gvlfuneralchapel.com.

The family of Charles Elmer Tyrrel created this Life Tributes page to make it easy to share your memories.

Send flowers to the Tyrrel family.