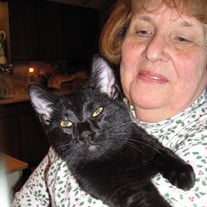 Cheryl (Lauffer) Mitchell, 76, of Oskaloosa passed away peacefully on Friday, February 5, 2021, at Mahaska Health Partnership in Oskaloosa, Iowa. Cheryl was born to Charles and Leona (Prickett) Lauffer on February 14, 1944 in Fort Madison, Iowa. She attended elementary, middle, and high school in Denmark, Iowa, where she graduated salutatorian in 1961. Her interest in teaching led her to Northeast Missouri State Teachers College (now Truman State University) and she graduated with a degree in Elementary Education in 1964. She shared her love of learning as a first grade teacher in Cedar Rapids, Iowa, for five years and in Ames, Iowa, for two years. Cheryl married Jerry Mitchell on November 24, 1967. They had two daughters and in 1975, the family moved to Oskaloosa where she pursued her passion for helping women find the perfect outfit as a salesperson at clothing stores such as Spurgeon’s and Snider’s before embarking on a new chapter as a bookkeeper at Bloom Builders where she worked until she retired. Since the age of 10, Cheryl played saxophone. Her musical talents took her to the 1965 World’s Fair where she played bass clarinet in a clarinet choir. Her love of music continued to flourish during her years in Oskaloosa. Some of her fondest memories were playing saxophone in the Oskaloosa Community Band for more than 30 years and in William Penn College Community Band for the rest of her life. She also enjoyed reading, sewing, and collecting dolls. Cheryl’s surviving family includes daughters, Kimber (Tom) Van Heukelom and Kathleen (Kalli Phillips) Mitchell; sister Carol Lauffer; brother Wayne Lauffer; and faithful family friend Larry Moore. In death, Cheryl joins her daughter, Kristen, mother, father, husband, and beloved cat Felix who was her constant companion for 16 years. Private funeral services will be held with burial at the Fairview Cemetery in Fort Madison, IA. The family will hold a memorial celebration for friends and family at a later date. Memorials and cards of condolence can be sent to the family at the funeral chapel and messages of condolences can be left on Cheryl's Tribute Wall. Langkamp Funeral Chapel has been entrusted with Cheryl's final arrangements.

The family of Cheryl Mitchell created this Life Tributes page to make it easy to share your memories.

Send flowers to the Mitchell family.