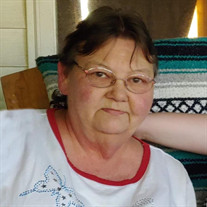 Cindy M. Baker, 61, went to be with her Lord, Wednesday, October 14, 2020, with her family around her. Cindy was the daughter of Butch Adkins and Barbara Evatt. Cindy went to school at Ankeny High School. She later obtained her G.E.D. and her surgical tech degree. She worked for many years as a CNA/CMA. Cindy worked at the Montezuma Nursing Home, New Sharon Care Center, Friendship Manor, and Mayflower Nursing Home. Don and Cindy were united in marriage on October 2, 1982, in Des Moines, Iowa. They lived a few years in Des Moines, and in 1988 they moved to Barnes City, Iowa, where they became part of the community. Cindy was a Ruritan member until it dissolved and then helped with the Barnes City Betterment Club. Cindy enjoyed helping with the Community Christmas. She loved being able to find nice toys at a bargain price! In the last couple of years, Don and Cindy have played Santa Claus and Mrs. Claus. She loved seeing all the kids so happy. Cindy loved to paint wooden signs and do crafts. She had a green thumb and enjoyed working in her flower beds. The kids always came to her for help with their own flower gardens. Cindy also enjoyed sewing projects. She would always complain about having to rip the stitches out and start again, but she just kept at it. Blankets seemed to be her specialty! Each one had their own “Cindy Flaw”. Cindy was an amazing baker. Her brownies were always a hit, and at Christmas time, she would bake cookies and make many different kinds of candy. She always knew what the kid’s favorites were. Cindy and Don loved going camping. She always said she was a fair-weather camper. Cindy always had to have the biggest campfire. Don always knew he had to pack a lot of firewood, or he would have to go back and get more. One of her favorite places to camp was at Diamond Lake. She could sit by the fire, watch the lake and animals, and have a book close by. Cindy also spent many, many hours out on her swing. It was a peaceful place. Cindy would do anything for her kids and grandkids. Grandkids needed help with a school project, and grandma was there to help. Had an injury, grandma was there. One of the kids not feeling well, Mom to the rescue! Cindy adored her grandkids. Cindy is survived by her husband Don of 38 years. Her kids, Tanya Adkins, Donnie and Rose Baker, Lance Baker, and Danielle Kline. Her 6 grandkids, Emily and Gage Ries, Cheyanne Baker, Gasper Baker, Odyssey Baker, and Izzy Ray. Her mother Barbara Evatt, a brother Bart (Penny) Adkins, two sisters Rhonda (Chris) Torrez and Lorie (Mike) Webb, two brother-in-law’s, Chuck (Gloria) Baker and Jerry Baker, two sister-in-law’s Linda (Russ) Runge and Margie Baker, and many nieces, nephews, family, and friends. Cindy is preceded in death by her father Butch Adkins, Step-dad, Richard Evatt, brother Steve Adkins, mother-in-law Ruby Koning, a brother-in-law John Baker, and nephew Kurt Adamson. As was her wish, Cindy’s body has been cremated. A memorial service will be held at a later date. Memorials may be made in her name to be designated at a later time.

Cindy M. Baker, 61, went to be with her Lord, Wednesday, October 14, 2020, with her family around her. Cindy was the daughter of Butch Adkins and Barbara Evatt. Cindy went to school at Ankeny High School. She later obtained her G.E.D. and her... View Obituary & Service Information

The family of Cindy M. Baker created this Life Tributes page to make it easy to share your memories.

Send flowers to the Baker family.