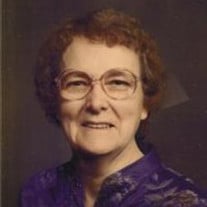 Clara Van Maanen: Clara passed away early Sunday morning, Feb. 20, 2005 at The Comfort House of Pella at the age of 91 years, 1 month and 25 days. Clara is survived by her children: Kenneth & Charlene Van Maanen of Sully, IA; Alvin & Marcia Van Maanen of Oskaloosa, IA and Joyce and Larry Groenendyk of Leighton, IA; 12 grandchildren, 2 step grandchildren, 26 great grandchildren, 8 step great grandchildren, and 2 great great grandchildren; a sister, Agnes Plate and a sister-in-law, Eva Van Maanen, both of Pella. Clara Van Maanen, daughter of Gerrit & Inske (Agnes) Van Rees Steenhoek was born December 26, 1913 north of Leighton, IA. She was a graduate of the Meade No. 7 Country Grade School. She married Brandt Van Maanen on Feb. 23, 1934 at her parent's home near Leighton. Together, she and Brandt farmed in the Oskaloosa and Fremont area's for the first 12 years of their marriage. They then purchased the grocery and hardware store in Cedar, which they operated for the next 30 years, retiring in 1976. They were residents of Cedar for 50 years, moving to Oskaloosa in 1996. In Nov. 2001 they moved to Pella Hilltop North Assisted Living. Clara was a homemaker and will be remembered for her years of service to the community at their store. She was a charter member of the Cedar Christian Reformed Church, where she sang in small groups and was active in the Ladies Aid. She enjoyed crocheting, embroidery, gardening and music. She was preceded in death by her parents, her husband, two brothers who died in infancy, four sisters: Mable De Jong, Gertrude Van De Wall, Marie Rouw, and Edna Vos; three brothers: Andrew, Walter and Richard Steenhoek; and one step grandson, Craig Laverne Van Wyk. PDF Printable Version

The family of Clara Van Maanen created this Life Tributes page to make it easy to share your memories.