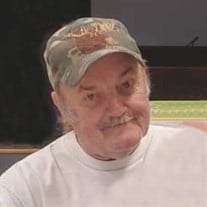 Clarence Yeo, 73, of Oskaloosa passed away Wednesday, September 29, 2021, at Unity Point St. Luke’s Hospital in Cedar Rapids, Iowa. Clarence Adrian Yeo, son of Cleo and Louise (DeWild) Yeo, was born February 1, 1948 in Montezuma, Iowa. The family moved to Oskaloosa when Clarence was young, he attend Oskaloosa Schools and later earned his G.E.D. He furthered his education at Indian Hill Community College where he earned a degree in Auto Mechanics. Through out his life he was self employed as a mechanic, he loved all things mechanical and was happiest when he could help someone. In his later years, Clarence also worked at Ruby’s Fur Farm, where he helped care for the animals. He was united in marriage to Jeanetta Poe and together they had eight children. After she died, he married Linda Tapley on April 20, 1979, and together they had four children. Linda died July 25, 2005. Clarence loved spending time with his children, grandchildren and great-grandchildren. He also enjoyed going to casino’s and buying lottery pulltabs. He considered himself lucky and always called his kids to let them know of his winnings. His family includes his children: Jerry (Grace) Charbonneau of Oskaloosa, Sherry (Dan) Charbonneau of Rose Hill, Frankie Charboneau of Rose Hill, Chris Ferns of Oskaloosa, Charlie (Kendra) Charbonneau of Oskaloosa, Edie McCan (Doc Visser) of Oskaloosa, Wendy Yeo of Oskaloosa, Clarence (Cassie) Yeo Jr. of Oskaloosa, Terry (Valerie) Tapley of Colorado, Carl Geier of Florida, Tammy Geier of Alabama, and Angel Bilbrey of Florida; 45 grandchildren,17 great-grandchildren, and two great-great-grandchildren. He is also survived by three sisters: Mary Garrett, Marie (Russell) Sparks, and Lucille (Bud) Poe, all of Oskaloosa. In addition to his parents and his two loving wives, Janetta and Linda, Clarence was preceded in death by his son, Terry; three brothers: Richard, Clyde and Donnie; and an infant sister, Ada. Funeral Services for Clarence will be held at 11 a.m., Monday, October 4, 2021, at Langkamp Funeral Chapel in Oskaloosa with Pastor Alvern Boetsma officiating. Burial will be at Old White Cemetery in Oskaloosa. Visitation will begin at 9 a.m., Monday; the family will be present from 10 a.m. to service time to greet visitors. Memorial contributions can be made to the family.

The family of Clarence Yeo created this Life Tributes page to make it easy to share your memories.

Send flowers to the Yeo family.