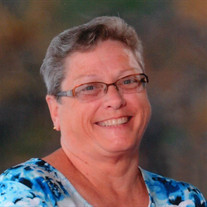 Connie Hanna, 65, of Beacon, passed away Friday, November 29, 2019, at the Mahaska Health Hospice Serenity House. Connie Sue Hanna, daughter of Albert and Dorothy (Barnhill) Sherman, was born April 28, 1954, in Oskaloosa. She attended Oskaloosa schools and was a 1972 graduate of Oskaloosa High School. She married her high school sweetheart, Jon Hanna, on June 21, 1972, while he was home for three days between military deployments. Through the years, Connie worked at J.C. Penney’s, Jaarsma Bakery, and as a bookkeeper for Duane Schutjer’s nursing homes. She was lastly employed as a debt collector for the Credit Bureau Services of Iowa from October 1, 1990 to March 31, 2011. The highlight of Connie’s year was camping at the Iowa State Fair, a tradition that lasted the 41 years. She enjoyed shopping and time spent with her grandchildren. Her family includes her husband, Jon; her daughter and son-in-law, Wendy and Brett Bares of Oskaloosa; and her grandchildren: Stella Bares and Grayson Bares, also of Oskaloosa. Her extended family includes her siblings: Steve Sherman of Beacon, Dennis (Cathy) Sherman of Oskaloosa, Kathy Green of Beacon, and Larry (Sharon) Sherman of Oskaloosa. In addition to her parents, Connie was preceded in death by her husband’s parents. Visitation will begin after 11 a.m., Wednesday, December 4, 2019, at Langkamp Funeral Chapel; the family will greet visitors from 5-7 p.m. As was her wish, her body has been cremated. Burial of her ashes will be in Beacon Cemetery. Langkamp Funeral Chapel & Crematory is handling the arrangements. Memorial contributions can be made to the Mahaska Health Hospice Serenity House.

The family of Connie Sue Hanna created this Life Tributes page to make it easy to share your memories.

Send flowers to the Hanna family.