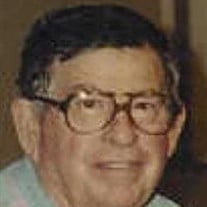 Dale Marlowe Dickinson: Dale passed away Tuesday evening at Iowa Methodist Medical Center in Des Moines at the age of 79 years, 3 months and 4 days. Dale attended the First Christian Church in Oskaloosa; he was a member the American Legion, and has served as president of the Antique Tractor and Engine Committee at the Southern Iowa Fair. Dale loved all things mechanical, he was constantly trying to figure out how to make things work better; it was not unusual for him to redesign something he had just purchased, to make improvements. He enjoyed restoring and collecting Minneapolis-Moline tractors. A favorite project during retirement was modifying a 5 gallon ice cream freezer so that it could be powered by a single cylinder antique gas engine. He enjoyed providing homemade ice cream at many events both locally and around the state. Dale loved his family and friends and was very devoted to them. Dale Dickinson, son of Earl Wayne & Mae Fausch Dickinson, was born on Feb. 16, 1924 in St. Ansgar, IA. The family lived in St. Ansgar and Truro before moving to Ames when Dale was a teenager. He was a 1943 graduate of Ames High School and was immediately drafted in the U.S. Army. He served with the 11th Armored Division, Battery A, in the European Theater, primarily as a Half Track Driver; he fought in the Battle of the Bulge and was discharge on March 26, 1946. Upon his discharge, he returned to Williams, IA where he went to work with his father at Dickinson Hardware. He attended Iowa State College for a time, where he studied Industrial Arts. Dale returned to Williams to assist his father at Dickinson Hardware, where he developed the mechanical and electrical service component of the business. On May 16, 1947, Dale married Dorothy Thelma Westwick in Cambridge, IA; she passed away after 23 years of marriage on Sept. 3, 1970. In 1958, the mechanical construction work on Oskaloosa's new high school brought Dale and his family to Oskaloosa. In 1963, Dale and his father founded the Dickinson Company, Inc., an electrical and mechanical contracting business; contracting numerous projects in Oskaloosa and south central Iowa. In 1966, the business changed its primary focus to traffic signals & highway lighting. On March 11, 1972, Dale married Dorothy Canine Prine in Oskaloosa. Dale retired in 1989 but continued to remain active in the business with two of his sons. Dale's memory is honored by his wife, Dorothy of Oskaloosa, and his four sons and three daughters-in-law: Marlowe & Bev Dickinson, Jim & Kathy Dickinson, and Dave & Barb Dickinson all of Oskaloosa and Doug Dickinson of Santa Maria, CA and one stepson, David and his wife, Beverly Prine of Oskaloosa. He was blessed with 9 grandchildren: Eric and his wife, Rachel of Vinton, IA; Matthew, Rebecca, Charles, Monica, Kendra, Sara, Ryan and Heather Dickinson, all of Oskaloosa and one great granddaughter, Emma Dickinson. He is survived by two sisters, and a brother: Norma, and her husband, Harold Rutz of Des Moines, Donna Adams of Cedar Rapids, and Burton and his wife, Pat Dickinson of Connecticut. Dale was preceded in death by his parents, his first wife, and one brother, Wayne Dickinson. ************************************************* In lieu of flowers the family request memorial donations be made to the Dale Dickinson Scholarship, a scholarship to a student studying construction engineering; memorials may be sent to Dickinson Company, P.O. Box 227, Oskaloosa, Iowa 52577. PDF Printable Version

Dale Marlowe Dickinson: Dale passed away Tuesday evening at Iowa Methodist Medical Center in Des Moines at the age of 79 years, 3 months and 4 days. Dale attended the First Christian Church in Oskaloosa; he was a member the American Legion,... View Obituary & Service Information

The family of Dale Marlowe Dickinson created this Life Tributes page to make it easy to share your memories.

Send flowers to the Dickinson family.