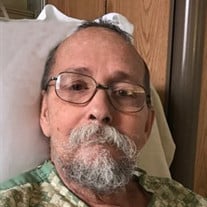 Dale Ferns, 65, of Oskaloosa passed away Monday morning, September 25, 2017, at West Ridge Nursing and Rehab Center in Knoxville, Iowa. Dale Raymond Ferns, son of Dale Edward and Esther Marie (Showman) Ferns, was born May 20, 1952, in Sigourney, Iowa. He was raised in Sigourney where he graduated with the class of 1969. Dale served in the US Army and was honorably discharged in 1969. Dale married Chris Faye Charbonneau August 29, 1988, in Oskaloosa. Through the years, Dale worked in meat packing plants in Marshalltown, Columbus Junction, and Ottumwa. He was last employed by B & B Bedding in Oskaloosa. He was a past Eagles Lodge member and a current member of the First Pentecostal Church in Oskaloosa. In his spare time, he enjoyed reading, walking his dog, Lucy, horseback riding and fishing. He is survived by his wife, Chris of Oskaloosa; his children: Raymond Ferns and Amber Ferns, also of Oskaloosa; three grandchildren; a sister, Shirley Peiffer of Oskaloosa; two half-sisters; several nieces and nephews; several great-nieces and nephews; and several brothers-in-law and sisters-in-law. Dale’s father passed away in 2004 and his mother in 2003. In accordance with his wishes, Dale’s body has been cremated. A memorial service will be held at 2 p.m., Sunday afternoon, October 1, at First Pentecostal Church with Pastor Adrian Wolfe officiating. Memorials may be made in his name.

The family of Dale Raymond Ferns created this Life Tributes page to make it easy to share your memories.

Send flowers to the Ferns family.