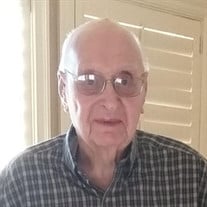 Dale Veldhuizen, 98, of Oskaloosa, passed away Saturday, June 12, 2021, at the home of his daughter in Lee's Summit, Missouri. Dale Irvin Veldhuizen, son of John and Hattie (Schemper) Veldhuizen, was born on January 31, 1923, at the farm home of his parents near Prairie View, Kansas. In 1925, the family moved to Tracy, Iowa and Dale attended Jack Oak School through the eighth grade. November 25, 1943, Dale married Icel Hutton. From that union, two daughters were born, Sharyn and Pam. Icel passed away on May 20, 1971. Dale served his country from 1945 through 1946 aboard the Naval ship USS Commencement Bay CVE 105. He was a member of the American Legion. In May of 1975, Dale married Marie Roorda. Marie passed away on September 22, 2002. Dale's favorite work memories came from his employment with Hank and Bert Hugen, driving his red Mobil truck. While delivering gas and oil to his customers, he made a great many friends. Often you could find him at their kitchen table having a cup of coffee. Also, know as the "Candy Man," he always had Penny Logs and Smarties for his customers' children. Later in life, you would find Dale at the "Veldhuizen Table" in McDonald's, enjoying coffee and great conversations with his brothers and friends. Dale's family includes his daughters, Sharyn Spencer of Springfield, MO, and Pam (Steve) Lanning of Lee's Summit, MO; a step-daughter, Linda Roorda Mein, and step-son: John Roorda. Grandchildren Shawn (Susan), Tom, Kim (Steve) and Scott, also survive their grandpa. Surviving great-grandchildren are Garrick (Ashley), Danielle (Devon), Mandy (David), Molly, and Alex. Dale is also survived by six great-great-grandchildren: Brock, Bayley, Kenzie, Wyatt, Fisher, and Rocco. He is lovingly survived by many, many grand dogs. Dale leaves behind a sister, Veda (Bill) Bousema, and many nieces and nephews. In addition to his parents and wives, Dale was preceded in death by his step-father, John Schemper, and his sisters: Hendreen Branderhorst, Gradda Tien, brothers: Jay, Bill, Albert, Richard, and an infant brother, Leroy, and a step-son, Al Roorda. Dale's beloved friend, Mary Hunt, also preceded him in death. The funeral services for Dale will be held at 10:30 a.m., Friday, at the Central United Methodist Church, with Rev. Chris Childs officiating. Burial will be in Forest Cemetery with Military honors by the Oskaloosa Honor Guard. Visitation will begin at 11 a.m., Thursday at Langkamp Funeral Chapel; the family will greet visitors from 4-6 p.m. Thursday. Memorials can be made to Central United Methodist Church or Furry Kids Refuge c/o Kim Accurso P.O. Box 290 Lone Jack, MO 64070.

Dale Veldhuizen, 98, of Oskaloosa, passed away Saturday, June 12, 2021, at the home of his daughter in Lee's Summit, Missouri. Dale Irvin Veldhuizen, son of John and Hattie (Schemper) Veldhuizen, was born on January 31, 1923, at the farm home... View Obituary & Service Information

The family of Dale Veldhuizen created this Life Tributes page to make it easy to share your memories.