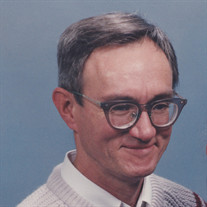 Dan Arthur Ver Ploeg, 84, of Anchorage, Alaska, and formerly of Columbus, Ohio, and Oskaloosa, Iowa, passed away Thursday, March 26, 2020, at the Pioneer Home in Anchorage, Alaska. Dan Ver Ploeg, son of Byron M. and Gladys A. (Brenton) Ver Ploeg, was born August 8, 1935, in Oskaloosa, Iowa. He was a 1953 graduate of Oskaloosa High School and a 1957 graduate from Grinnell College, where he earned a degree in chemistry. He continued his education at the University of Iowa, where he earned a Master’s Degree in Biochemistry in 1960. He received his Doctorate Degree in Physical Chemistry from the University of Wisconsin and then did postdoctoral studies for three years in biochemistry at Indiana University in Bloomington, Indiana. Dan moved to Columbus, Ohio, in 1970; there he worked for Chemical Abstracts Service, writing abstracts of scientific research papers. In 1987, Dan joined the Ohio Environmental Protection Agency Division of Drinking Water, where he wrote regulations for public water systems, retiring in 1999. Dan married Gail Davenport on Leap Day, 1964; to this union, two children, Eric and Kathryn, were born. His second marriage was on August 8, 1988, to Angela Henn Bollinger. They liked the date 8-8-88, and Dan found his anniversary easier to remember since it was also his birthday, 8-8. After his retirement, they moved to Anchorage, Alaska, for her work as a school psychologist in remote Alaskan villages. Angela passed away in 2015. Dan was a licensed pilot and long-time spelunker, exploring caves in his free time. He was an avid bicyclist his whole life -- once riding 620 miles in 2.5 days. Dan was famous for his home-baked bread and his very precise cheesecake recipe. He was a regular square dancer and was always in charge of keeping the coffee pot full. Dan enjoyed construction projects and did electrical wiring for Habitat for Humanity. He was always civic-minded and planted raspberries in his front yard for the neighborhood children to nibble on. His family includes his children and their spouses: Eric and Debra (Hassing) Ver Ploeg of Menlo Park, California, and Kathryn (Ver Ploeg) and Eric (Williams) Verwillow of Palo Alto, California; five grandchildren: Lauren, Ava, and Brooke Ver Ploeg, and Anna and Neil Verwillow; and a brother, Brenton Ver Ploeg of Coconut Grove, Florida. And as Dan would always say, “When all else fails -- try reading the directions.” Funeral arrangements are pending at Langkamp Funeral Chapel in Oskaloosa, Iowa. Burial will be in Forest Cemetery in Oskaloosa. Memorial Contributions can be made to William Penn University in Oskaloosa.

The family of Dan Ver Ploeg created this Life Tributes page to make it easy to share your memories.