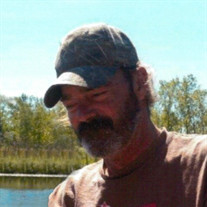 Danny D. Brown, 58, of Oskaloosa, passed away Monday, September 30, 2019, at his home in Oskaloosa. Danny David Brown, son of Danny and Elaine (Garrett) Brown, was born December 30, 1960 in Oskaloosa, Iowa. He was a 1979 graduate of Oskaloosa High School. As a young man he began working for Carriker Ford as a body mechanic. Over the years he also worked for Larry Mitrisin and Mitrisin Motors. Danny was dependable in his career and enjoyed what he did. He continued to do bodywork until ill health forced him to retire in January of 2017. Danny met the love-of-his-life, Patty Ann Thompson, in April 1993, on February 18, 2017, Danny and Patty were united in marriage. Danny was a member of the National Rifle Association and enjoyed hunting and fishing with his father, wife, son and daughter. He loved the outdoors, being on the river, scouting deer but most of all, spending time with his family. His family includes, the love of his life, his wife, Patty Brown; his daughter, Nicole Brown of Bussey, IA and his son Wesley (Erika) Brown of Oskaloosa, IA; his step-daughters, Miranda (Jimmie) Teeter of Oskaloosa and Kristen (Tory Mathis) Scholtus of Oskaloosa, IA; a step-son, Brandon Roberts of Oskaloosa, IA; five grandchildren, Bryer, Natalie, Emilea, Kylie and Braylie; his parents Danny and Elaine Brown of Oskaloosa, IA; his parents-in-law, Jerry and Sharon Thompson of Beacon, IA; a sister Deb (Phil) Kennedy of Grimes, IA; and two nephews Aaron Lafrenz of Pleasant Hill, IA and Ryan (Missie) Lafrenz of Indianola, IA. Visitation will begin at noon on Thursday, October 3, 2019 at Langkamp Funeral Chapel, with the family present from 5-7 p.m. As was Danny's wish, his body has been cremated. A private burial will occur at a later date. Memorials may be made in his name.

Danny D. Brown, 58, of Oskaloosa, passed away Monday, September 30, 2019, at his home in Oskaloosa. Danny David Brown, son of Danny and Elaine (Garrett) Brown, was born December 30, 1960 in Oskaloosa, Iowa. He was a 1979 graduate of Oskaloosa... View Obituary & Service Information

The family of Danny David Brown created this Life Tributes page to make it easy to share your memories.