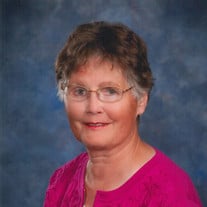 After a life filled with love and service to others, Darlene Shepherd died Wednesday, December 20, 2017, at Unity Point Iowa Methodist Medical Center in Des Moines following a short illness. Langkamp Funeral Chapel and Crematory in Oskaloosa is entrusted with cremation when her long-standing request for whole body donation could not be honored. Following private family burial in Forest Cemetery, Rev. Don Stribling will lead a celebration of her life and witness to the resurrection at First Presbyterian Church (405 High Avenue E) in Oskaloosa Iowa at 10:30 am on Saturday, June 2, 2018. Memorial visitation with the family will take place at the luncheon following the celebration of life. She was born in the hospital at Perry, Iowa on September 15, 1934, as the youngest child of Amos Bush Siglin and Myrtle Louiza (Underwood) Siglin. She grew up on farms in the Woodward and Seymour, Iowa areas and was involved in the local Methodist Church, 4-H, and high school musicals. She married David Carl Shepherd of Seymour on April 20, 1951, in Des Moines on her parents’ 25th wedding anniversary with her sister Marilyn as her attendant. She was a licensed practical nurse in the Oskaloosa area for many years and particularly liked working with older adults and cancer survivors. In 2014 she received a lifetime achievement award from the national Presbyterian Older Adult Ministries Network. Darlene and Dave’s life together was spent primarily in the Eddyville and Oskaloosa Iowa areas. For decades they attended many sports, music and drama events involving children and grandchildren. In later life travel including winter trips to the warmth of Florida were anticipated with joy, as long as her health allowed. Darlene’s children are Vickie (Jay) Kintzel, Tom (Cindy) Shepherd, Ann (Wayne) Rowland, Jana (Rick) Barnard, Robert Shepherd and Beth (Todd) Hartz. There are 18 grandchildren and 43 great-grandchildren. She is also survived by her sister, Marilyn Vanderlinden; a sister-in-law, Anita (Max) Rash and many nieces, nephews, cousins, and friends. She was preceded in death by her husband, David Shepherd; sons-in-law Brian Hartz and Wayne Rowland; sister, Doris Holland and brother, Courtney Siglin, and her parents. In lieu of flowers, memorials may be made to Crisis Intervention Services: https://www.stopdvsa.org/, Mahaska County Homelessness Coalition: https://www.facebook.com/MahaskaHomeless/ or Iowa Network Against Human Trafficking and Slavery: https://iowanaht.org/donate-now/.

The family of Darlene Marie Shepherd created this Life Tributes page to make it easy to share your memories.

After a life filled with love and service to others, Darlene...

Send flowers to the Shepherd family.