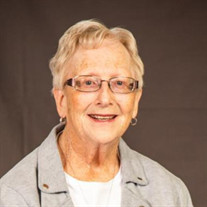 Darlene Slagter, 81, of Oskaloosa, passed away peacefully, surrounded by her family on Tuesday, November 10, 2020, at the Mahaska Health Hospice Serenity House in Oskaloosa. Darlene Rae Slagter was born on February 5, 1939, at the Chillicothe home of her parents, Raymond Christopher and Dora (Van Ommen) Lamers. She attended country school and was active in 4-H as a youngster. In 1956, she won a trip to the National 4-H Club Congress in Chicago. She graduated from Oskaloosa High School in 1957. While in school, she worked as a secretary for Farm Bureau Insurance and continued to work there until her children were born. Darlene married Harold Duane Slagter on May 10, 1963, at the Central Reformed Church. Before starting a family, Darlene and Harold babysat for several families in Oskaloosa, allowing parents to leave their children in capable hands when they took vacations. Darlene’s faith and church were foundational and focal points in her life: she and Harold served as junior high youth leaders, and she served on the Congregational Life Committee. She also served as Vacation Bible School secretary/treasurer for 30 years. She and Harold served as custodians at their church for 17 years, and her capable kitchen skills gave her the title of “Queen of Funeral Luncheons.” Darlene was always looking for opportunities to serve, her leadership in 4-H led to her role as chairman of the Apple Pie Contest at the Southern Iowa Fair for 30 years, and in 2011, she and Harold were crowned Queen and King of the fair. Darlene enjoyed helping others; she cleaned homes for many people that soon became her friends; she transported people to doctor’s appointments and even served as a wedding coordinator on numerous occasions. Darlene also enjoyed relaxing at home and playing games and cards with family and friends. Gospel music concerts and car races were some of her favorite events early on, and in later years, her grandchildren’s activities were always her priority. And then there was the kitchen……Darlene’s favorite room in the house. She was happiest when she was creating a meal for her family or one to share with friends. She showed love for others by baking and cooking delicious treats; she made countless wedding mints and 10’s of thousands of buns. The hardest part of being sick for her was her lack of energy to work in her kitchen. Darlene’s life was one of service to others; she demonstrated her faith in all she did. But her faith did not only include acts of compassion and generosity; she warned her family against holding grudges and believed that forgiveness was one of the greatest acts of kindness. Her family includes her husband Harold of over 57 years; her daughters, Teresa (Andre) Luyet of Sedalia, MO and Sharon Cunningham (Bob Arendt) of Oskaloosa; four grandchildren: Torri and Alec Luyet and Conrad and Jessica Cunningham; a sister, Betty Augustine of Oskaloosa and a brother, Gerald (Sue) Lamers of Earlham, IA; a brother-in-law, Irvin (Donna) Slagter of Oskaloosa; and several nieces and nephews. In addition to her parents, she was preceded in death by her mother-in-law, father-in-law, Jacob and Cena Slagter. Private funeral services will be held for Darlene with Rev. Jon Nelson of Central Reformed Church officiating. Burial will be in Forest Cemetery. Visitation will begin at 11 a.m. to 6 p.m., Monday, November 16, at Langkamp Funeral Chapel. According to the rules put in place by the Iowa Department of Public Health, proper social distancing and appropriate personal protective equipment are advised for attending this public event. The service will be available to view on the Langkamp Funeral Chapel’s YouTube channel Tuesday afternoon. Darlene requested no flowers be sent to her service; she requested memorial gifts be given to Mahaska County Law Enforcement Center or the Mahaska Health Foundation for the Serenity House.

Darlene Slagter, 81, of Oskaloosa, passed away peacefully, surrounded by her family on Tuesday, November 10, 2020, at the Mahaska Health Hospice Serenity House in Oskaloosa. Darlene Rae Slagter was born on February 5, 1939, at the Chillicothe... View Obituary & Service Information

The family of Darlene Slagter created this Life Tributes page to make it easy to share your memories.