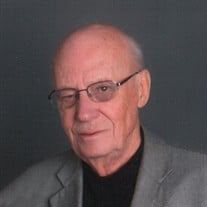 Darrell Cline, 84, of Oskaloosa, passed away Monday, March 28, 2022, at Mahaska Health Hospice Serenity House in Oskaloosa. Darrell Wayne Cline was born May 26, 1937, in Oskaloosa to Kenneth and Edith (LaForce) Cline. He was a 1955 graduate of Oskaloosa High School. He served in the National Guard, serving from 1959 to 1966. He married Joyce Bruxvoort on September 22, 1959, at the Bethel Christian Reformed Church, and they made their home in rural Oskaloosa. His first job was as a farmhand for Ernest Blom. After doing that for two years, he was hired at Wilcox-Garland Furniture Store. He remained with Wilcox Garland for 42 years, serving as assistant manager for the last years. He retired in June 2000. As a young man, he was an 11-year member of the Oskaloosa Jaycees and later a 25-year member of the Noon Kiwanis Club. Darrell was a member of the Bethel Christian Reformed Church. He enjoyed woodworking in his basement workshop, collecting toy tractors, trucks, and cars. Darrell and Joyce enjoyed attending auctions, gardening, and camping at the state fair. His family includes his wife, Joyce; his children and their spouses: Brenda and Randy Poe of Oskaloosa and Bruce and Wendy Cline of Brighton, CO; his granddaughters: Lindsey (Jordan) Engbers of Johnston, IA, Leah (Cole) Rolffs of West Des Moines, IA, Jordan Cline of Jefferson City, MO and Holland Cline of Northglenn, CO; and five great-grandchildren: Arbor Engbers, Rowan Engbers, Perry Rolffs, Chauncey Mullis, and Blake Haas. Darrell was preceded in death by his parents, an infant brother, Curtis, and twin great-granddaughters, Marra and Ferryn Engbers. Darrell's funeral services will be held at 10:30 a.m., on Saturday, April 2, 2022, at Bethel Christian Reformed Church, with Rev. Douglas Van Der Pol officiating. The burial will be in Forest Cemetery. Visitation will begin at 11 a.m. Friday at Langkamp Funeral Chapel; the family will greet visitors from 4-7 p.m. Memorial contributions can be made to Oskaloosa Christian School.

Darrell Cline, 84, of Oskaloosa, passed away Monday, March 28, 2022, at Mahaska Health Hospice Serenity House in Oskaloosa. Darrell Wayne Cline was born May 26, 1937, in Oskaloosa to Kenneth and Edith (LaForce) Cline. He was a 1955 graduate... View Obituary & Service Information

The family of Darrell Cline created this Life Tributes page to make it easy to share your memories.

Send flowers to the Cline family.