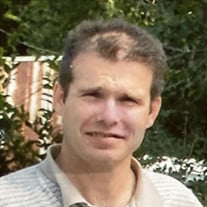 Darren Bunnell, 54, of West Point, IA, and formerly Oskaloosa, passed away Sunday, September 5, 2021, near West Point. Darren Eugene Bunnell, son of Delbert Wylie and Regina Kay (Shaffer) Bunnell, was born February 12, 1967, in Oskaloosa. Growing up in Oskaloosa, he enjoyed Little League and later became an avid bowler with his brothers. While in school, he worked at Fareway and Bonanza Restaurant. After graduating from Oskaloosa High School in 1985, he attended Indian Hills Community College, where he studied Machine Technology and earned his Associate Degree. He went on to utilize his skills working at Pella Corp. and Precision Pulley. Darren married Kayla Miller on April 29, 2006. They later divorced. Darren loved reading Western novels and watching Western movies; he wanted to be a cowboy early in his life. He loved the out-of-doors, enjoyed walking in nature, fishing, and had a real fascination for eagles. His family includes his children: Melissa (Cameron) Upton of Oskaloosa, Darren Jr. “D.J.” Bunnell of Quincy, IL, and Kiersten Bunnell, also of Quincy, IL; two grandchildren: Lilith and Lorelei; his parents: Delbert (Kerry) Bunnell of Winfield, IA, and Regina Bunnell of Oskaloosa; his siblings, Mechele (Ted) Harger of Oskaloosa, Jeremy Bunnell of Oskaloosa, Justin Bunnell of Smyrna, TN, and Noah Bunnell of West Branch, IA; and six nieces and nephews and three grand-nieces. Darren was preceded in death by his grandparents: Ruby Neuendorf, Lester Bunnell, and Earl and Lucille Shaffer. As was his wish, Darren’s body has been cremated. A gathering of family and friends will be held from 5-8 p.m., Tuesday, September 28, 2021, at the Gateway Church of the Nazarene. Instead of flowers, the family requests memorial contributions be made to his children for an education fund. Langkamp Funeral Chapel & Crematory has been entrusted with his arrangements.

The family of Darren Bunnell created this Life Tributes page to make it easy to share your memories.

Send flowers to the Bunnell family.