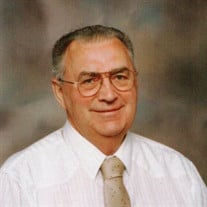 Darryl Nuehring, 75, of Oskaloosa passed away Monday, December 25, 2017, at the Oskaloosa Care Center in Oskaloosa. Darryl D. Nuehring, son of Earl and Marie (Meinders) Nuehring, was born, August 7, 1942, in Mason City, Iowa. He was a 1961 graduate of Klemme Community High School in Klemme, Iowa and then furthered his education at Hamilton Business College in Mason City, Iowa where he received a Junior Accounting Degree in 1963. He served in the Army Reserve from January 1961 to January 1968. Darryl married Pat Kramer November 25, 1963; they divorced in 1983. He married Leslie Graham Ehret, June 10, 1989, in Montezuma, IA. Initially, he worked as an outstanding salesman for Pride Seed Corn, Blaney Farms, Stauffer Seeds, McCurdy Seeds and several other seed and feed companies. Darryl and Leslie moved to Oskaloosa when Darryl took a job with Pierson Seed Co. He then drove a semi-truck over the road for Swift & Co. until an accident forced his retirement in 1995. He later was employed part-time by the City of Oskaloosa as a parking control officer and also worked at Sears and Wal-Mart before completely retiring due to health concerns in 2006. Darryl was a member of Central Reformed Church, and former member of Eddyville Masonic Lodge #74, Lafayette Chapter 232 – Order of the Eastern Star in Montezuma and a charter member of the Oskaloosa Lions Club. He enjoyed caring for his lawn and spending time with his dog. He is survived by his wife, Leslie Jo Nuehring of Oskaloosa; a son & daughter-in-law, Mark & Margaret Nuehring of Rochester, MN; stepsons and their wives: Larry & Gwendy Ehret of Montezuma, IA and Darrin & Marla Ehret of Deep River, IA; his grandchildren: Alex, Julia and Ryan Gowan-Nuehring; step-grandchildren: Caitlin (Jamie) Daniels, Madison, Sidney, Gracie, Dustin (Amberly), Dalton and Dillon Ehret; sisters: Joyce (Michael) Kelly-Lapides and Cindy (David) Weil of Denver, CO; two sisters-in-law: Lynette Nuehring of Cedar Rapids and Sharon Walters of Oskaloosa; and several nieces and nephews. Besides his parents, he was preceded in death by a grandson, Christopher Nuehring; a step-granddaughter, Mikyla Ehret; a brother, Harley Nuehring; his mother-in-law and father-in-law, Lorraine and Paul Robbins; a brother-in-law, Ab Walters; and sister-in-law, Carol McDowell. Funeral services for Darryl will be held at 11 a.m., Friday, December 29, 2017, at Central Reformed Church in Oskaloosa with Pastor Jon Nelson officiating. A family prayer service will be held at 10:45 in the East Lounge of the church. Visitation will begin after 11 a.m. at Langkamp Funeral Chapel; the family will greet visitors from 5-7 p.m. at the funeral chapel. Burial will be held at 11 a.m., Saturday, December 30, at Ell Township Cemetery in Klemme, Iowa. Memorials may be made to Central Reformed Church and Stephen Memorial Animal Shelter. Leslie is requesting that those attending the services wear the colors red or blue to represent the colors of the heart. She would like the service to be a celebration of his life.

Darryl Nuehring, 75, of Oskaloosa passed away Monday, December 25, 2017, at the Oskaloosa Care Center in Oskaloosa. Darryl D. Nuehring, son of Earl and Marie (Meinders) Nuehring, was born, August 7, 1942, in Mason City, Iowa. He was a 1961... View Obituary & Service Information

The family of Darryl Duain Nuehring created this Life Tributes page to make it easy to share your memories.

Send flowers to the Nuehring family.