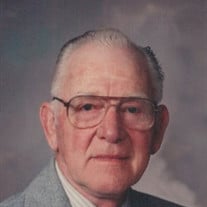 David P. Fry, 93, of Beacon passed away Saturday, October 21, 2017, at MHP Hospice Serenity House in Oskaloosa. David Peter Fry, son of Charles Wesley and Mae Christina (Isobaker) Fry, was born November 16, 1923, in Sigourney, Iowa. After his 1943 graduation from Barnes City High School, he worked as a farm hand until entering the U.S. Army-Air Force, June 19, 1945, at Jefferson Barracks, Missouri. He served in the European Theatre as a teletype operator and courier with the 22nd Army Airways Communications Squadron from January through October of 1946.  He was discharged November 28, 1946, as a Corporal.  Upon his return to Iowa, he was employed as an auto mechanic at Wymore Auto Repair in New Sharon, Iowa. Throughout his career, he went on to work in mechanics at Van Gorp Auto and later as an automotive machinist with Seegers, Arnold Motor Supply, and R.F. & W. Fitch & Company.  Although he retired in 1986, he continued to assist McKim Tractor rebuilding mower motors. David married the Love-of-his-life, Phyllis Colleen Margaret McDonough December 22, 1950, in Oskaloosa; they first made their home in New Sharon. In 1954, they moved to Beacon, where they raised their children.  He was a member of the N.R.A., a past member of the American Legion and in his spare time enjoyed hunting, fishing and trap shooting at the Isaac Walton League. His family includes Phyllis, his wife of over 66 years; his children and their spouses: Beth and Steve Bagby of University Park, Iowa, and Bruce Fry of Albuquerque, New Mexico; twin grandsons: Kirk Bagby and David (Sarah) Bagby, both of Jackson, Kentucky; and numerous nieces and nephews. In addition to his parents, David was preceded in death by a daughter, Teresa Mae; two sisters: Ruth McIntosh and Bernadine Padgett; two brothers: Phillip Fry and an infant brother; and his in-laws: Tom Padgett, Audrey McIntosh, and Catherine Fry.  Funeral Services for David will be held at 10:30, Tuesday, October 24, 2017, at Langkamp Funeral Chapel with Pastor Steve Bagby officiating. Burial will be in Forest Cemetery with Military Honors by the Oskaloosa Honor Guard.  Visitation will begin at 10 a.m., Monday; the family will be at the funeral chapel from 5-7 p.m. to greet visitors.  Memorials can be made to MHP Hospice Serenity House or the Beacon United Methodist Church.  Memories and condolences can be sent to the family by visiting the online guestbook at gvlfuneralchapel.com.

The family of David P. Fry created this Life Tributes page to make it easy to share your memories.