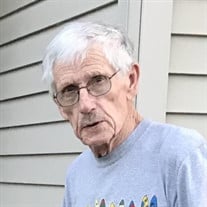 David Hansen, 81, of Oskaloosa and formerly of Cedar Rapids, passed away Sunday, February 28, 2021, at his home in Oskaloosa. David Lee Hansen, son of Oliver and Rose (Czako) Hansen, was born April 12, 1939, in Iowa Falls, Iowa. He was a 1957 graduate of Iowa Falls High School and then furthered his education at Iowa State University for two years. David enlisted in the Army and was stationed in Nuremberg, Germany, and worked maintaining and repairing tanks for 4 ½ years of the 6 ½ years he served. The remaining time he served in Kentucky. While in Germany, he met his wife, Annemarie Birkner; they married on December 23, 1963, in Röthenbach, Germany. After his discharge, the couple returned to Iowa Falls, and David farmed with his father for a couple of years. They then moved to Cedar Rapids, and David found a job using the skills he acquired in the military at an automotive repair shop. He soon opened his own repair business, Glick and Hansen Automotive, a business he owned and operated for 35 years until his retirement in 2003. Following retirement, he and Anne sold their home, purchased a motorhome, and toured the U.S. After several years of touring; they settled in Lake Dillon, Colorado. David worked for the Colorado Parks Department, maintaining ten different campgrounds from May to October. During the remaining months, the couple traveled to the Tuscon, Arizona area to winter. David worked in campground maintenance through 2018 when his health required his second retirement. In October 2019, the couple moved to Oskaloosa to be near family. David was a member of the American Legion while he lived in Cedar Rapids. While in the military, he was on the Shooting Team, and after his discharge, he continued to enjoy target shooting. His love of the great-out-doors was evident in his retirement when he could pursue his life-long passion for fishing. David’s family includes his wife, Annemarie of Oskaloosa; his sons and their wives: Frank Hansen and Linda Crookham-Hansen of Oskaloosa; and John Hansen and Christine Pierson Hansen of Mystic, Connecticut; and two grandchildren: Calvin and Karin Hansen. In addition to his parents, David was preceded in death by his brother, LeRoy Hansen. As was his wish, David’s body has been cremated. His final arrangements have been entrusted to Langkamp Funeral Chapel & Crematory. Memorial contributions can be made to the Mahaska Health Foundation for the Hospice Serenity House and sent to P.O Box 357, Oskaloosa, Iowa 52577.

The family of David Hansen created this Life Tributes page to make it easy to share your memories.

David Hansen, 81, of Oskaloosa and formerly of Cedar Rapids,...

Send flowers to the Hansen family.